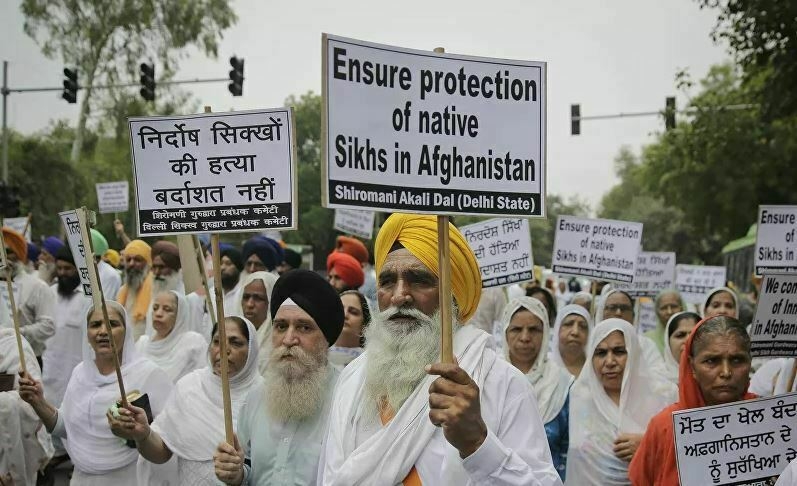 A Congress leader has urged Foreign Minister Subrahmanyam Jaishankar to grant “special visas” to evacuate 700 Hindus and Sikhs stuck in Afghanistan, in the face of increased violence in the war-ravaged nation as the Taliban sets its eyes on the country’s major cities.

​”The numerous episodes of attacks on minorities of Indian-origin, especially the recent shameful act of the Taliban removing the ‘Nishan Sahib’ (religious flag) from the holy gurdwara (Sikh temple) located in the Chamkani area of Paktia Province, the killing of 25 Sikhs during the attack on Gurdwara Har Rai Sahib in Kabul (March 2020), the suicide attack in Jalalabad on 1 July 2018 in which 19 Sikhs and Hindus were killed are a living testimony to the fact that Afghanistan is no longer a safe country”, stated Jaiveer Shergill, who is a spokesperson for Congress.

“You may be aware that these people, fearing for their lives have appealed to the government of India for their immediate evacuation”, the politician said in his letter to the foreign minister.

Once a thriving business community, Afghan Sikhs and Hindus now number only 700 in the country. According to historians, there were more than 200,000 of them in the 1980s. Most of the remaining Indian-origin communities live in Jalalabad, Kandahar, and Kabul.

Renewed fears about the state of Sikhs and Hindus were sparked last week, when Taliban militants reportedly forced a Sikh religious flag atop the historic shrine Thala Shri Guru Nanak Sahib in Afghanistan’s Paktia Province to be taken down.

According to The Hindu, the Taliban asked the Sikh temple’s gatekeeper to remove the flag and tie it to a tree.

In his letter to Jaishankar, Shergill expressed fear that the 700-odd Indian-origin people left behind in Afghanistan have become “sitting ducks” for the Taliban.

On 11 July, Delhi said that it had “temporarily” evacuated its officials from the Kandahar Consulate due to the intense fighting between the Taliban and Afghan National Security Forces (ANSF) near the city.

While the Taliban has repeatedly assured that it will protect the rights of Sikhs and other minorities living in Afghanistan, foreign governments such as India cast doubt on these “guarantees”.

“We have been supporting the government and people of Afghanistan in realising their aspirations for a peaceful, democratic, and prosperous future, where the interests of all sections of Afghan society, including women and minorities [are respected]. We are closely monitoring the evolving security situation, and we continue to call for an immediate and comprehensive ceasefire”, Indian Foreign Ministry spokesperson Arindam Bagchi said at a weekly briefing last week, while commenting on the evolving security situation.