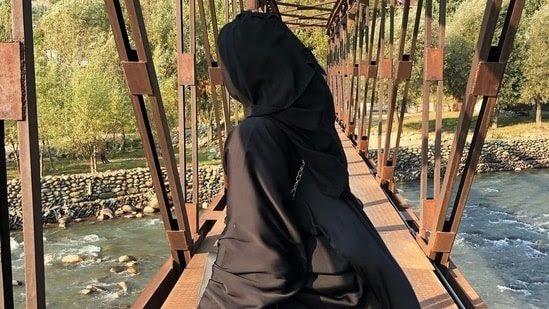 SRINAGAR: For the first time since she quit Bollywood, Zaira Wasim posted her picture on social media.Donning black `abhiya’ and `hijab’, she did not show her face in the picture though. In the picture, she is seen crossing a bridge at an unknown place.

“The Warm October Sun,” she wrote on her Instragam page.

The post broke the internet. It clocked more than 60000 likes in just one hour after she posted the pictureIn July 2019, Dangal girl shocked the showbiz when she quit acting, saying that it “threatened” her relationship with her faith.

“As I had just started to explore and make sense of the things to which I dedicated my time, efforts, and emotions and tried to grab hold of a new lifestyle, it was only for me to realize that though I may fit here perfectly, I do not belong here,” she wrote after quitting showbiz.

“This field indeed brought a lot of love, support, and applause my way, but what it also did was to lead me to a path of ignorance, as I silently and unconsciously transitioned out of Imaan [faith]. While I continued to work in an environment that consistently interfered with my Imaan [faith], my relationship with my religion was threatened,” she added.

National Award-winning former actor said it was always so easy to succumb to the environment that “damaged my peace, Imaan [faith] and my relationship with Allah.”Last year, she took to social media and wrote a long post to express her feeling about Kashmir post abrogation of Article 370. `The Sky Is Pink’ actor asked the world not to believe the unfair representation of the facts and details or the rosy hue that the media has cast on the reality of the situation.