The One Mukti India Desperately Needs 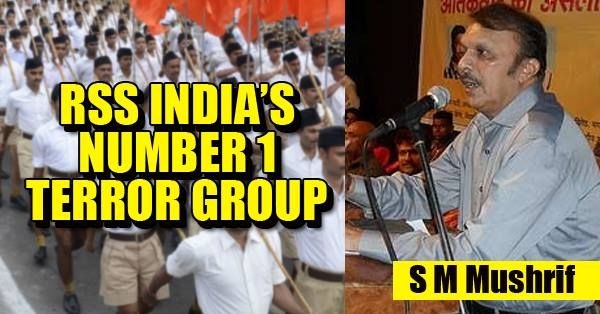 Much has been discussed in main stream media about the BJP’s war cry of Congress Mukt Bharat, the popular slogan that itself occupies the position of nothing more than a footnote in the BJP’s larger imagination of a Hindu Rashtra. However, the same vigour is missing when it comes to discussing riddance from BJP & RSS’ politics of hate. The silence on the subject assumes alarming proportions were one to specifically call for a ban on the RSS. There appears to be a tacit understanding between civil society, academia, media, judiciary and law enforcing agencies that come what may the legitimacy of RSS will not be questioned. The question about banning the organization last came up for discussion before VallabhBhai Patel after investigations in the Mahatma Gandhi’s assassination revealed Nathuram’s links with RSS. Patel under pressure to deliver outlawed it only to revoke the ban few days later.

Decades later Rahul Gandhi, in attempt to project himself as magnanimous says, that he doesn’t want a BJP & RSS Mukt Bharat. He himself serves no good by not amply clarifying as to what exactly he makes of this ambiguous phrase. As per records on at least a couple of occasions he has tried to deal with the subject. The one significant occasion that comes to mind is the speech he delivered in parliament in July this year during the Rafael debate at the end of which he walked up to the treasury bench and hugged the Prime Minister. Prior to the act he concluded his speech by saying that he doesn’t hate BJP & RSS & believed that he with his love and respect would one day bring them all into Congress’ fold.

Now when Rahul Gandhi says this there can be either one of two reasons. He may be having a sincere belief that he can get a changeover of heart and mind of the communal party. Or, it might be a cleverly crafted superficial remark to position congress as more inclusive of the two and earn in process a favourable press. If the reason he doesn’t want a BJP/RSS Mukt Bharat is to win over the opposition’s heart, & if indeed he succeeds in bringing about this tectonic change then it would be a historic effort by the Congress president, worthy of applause beyond doubt. But, and here I have my reservations, if he isn’t serious and has the limited agenda of political posturing, then it’s a dangerous development. The sign of this latter possibility was underscored during the press conference held by the Congress president on 11th December after the results for the assembly elections were declared, where he said that the BJP & RSS represent an idea which is a reality in our country. Here unlike his statement in parliament he seems to be legitimizing the idea that BJP & RSS stand for. By not denouncing in unequivocal terms the ideology of hate, he is essentially trying to woo over the Hindutva followers. Rahul Gandhi after 14 years in active politics can’t be so naive so as to not understand the ills that plague the idea he is speaking of as an established reality of this country.

To begin with, the Congress president must understand that RSS right from its very inception was inspired by fascism. Its founding fathers were rather sworn Hitler and Mussolini fans. It didn’t participate in the freedom struggle and in fact collaborated with the British. The false testimonies of RSS members led to imprisonment and hanging of many freedom fighters. Not to forget that it conspired to kill Mahatma Gandhi.

Post-independence it aspires for a majoritarian rule, believes in racial superiority and wants a theocratic state that promotes monolithic culture. Moreover, it doesn’t respect the rule of law, performs shastrapooja and runs its own private militia. Till only few years back it didn’t hoist the tricolour at its Nagpur office.

Its offshoots still burn the constitution on the eve of independence and republic day. It continues giving Manusmriti the order of precedence over the sacred book of the nation. It’s ideology of Hindutva transcends constitutional legit and it’s existence is a perpetual threat to the unity and integrity of this country. In recent years riding on the majoritarian wave it has managed to enter every nook and corner of the nation.

Presently it has at least two active members at village level who are entrusted with the job of advancing its propaganda, through a judicious mix of word of mouth and social media. It is increasingly trying to appropriate all symbols of Hinduism, be it scriptures, rituals or personalities and projecting itself as the fountain head of Santan Dharma. In the past four and half years since BJP came to power, several cases have come up where its members have been found to be spying for the neighbouring country, handing over critical defense Intel to ISI & Pak army. Its members have been indicted in several terror cases from Mecca Masjid, Malegaon to Samjhauta Express blasts.

Given Sangh’s history and his own future political relevance it would serve Rahul Gandhi a lot more good were he to be cognizant about Sangh’s infiltration of his own ranks. Contrary to whatever his wishes are, efforts towards a SanghMukt congress should hold primacy for him over all other issues. If indeed he has his heart in right place, he should respect BJP as the principal opposition but only sans its ideology.

RSS, in any case needs to be collectively called out, by all progressive quarters, for what it is – a terror outfit. Beyond BJP, Congress rhetoric this is one Mukti that India desperately needs.