The Judicialization of Politics in Pakistan 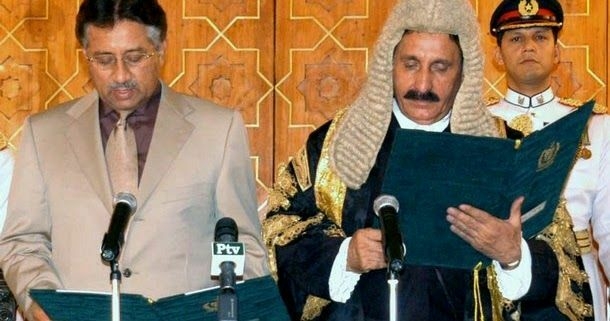 In mid-July, the Islamabad High Court (IHC), Justice Shaukat Siddiqui, asked the army chief and the Inter-Services Intelligence (ISI) chief to stop meddling in judicial affairs. By the month end, the Supreme Judicial Council had begun an investigation against Justice Siddiqui.
The Judicialization of Politics in Pakistan by Waris Husain is therefore aptly timed. It focuses on the overreach of the judiciary, keeping in mind the events of the ongoing decade, and juxtaposing it with the performance of the judiciary in the US and India.
The narrative, popularised by former Prime Minister Nawaz Sharif – not enough to win the elections last month of course – goes that the army and the judiciary collaborated to oust him and are working to undermine parliamentary supremacy. This, coupled with the aftermath of the lawyers’ movement and the undertakings of the ‘Chaudhry court,’ has brought the politicisation of the judiciary under the spotlight.
Waris Husain’s book looks into the Supreme Court as a dominant force in the country’s tripartite constitutional system and critically analyses its judicial reviews – most notably vis a vis the Parliament and the Prime Minister – since 2007. The comparisons with India and the US aren’t solely based on jurisprudence, but the development of judicial reviews in the three countries in question is scrutinised in detail, tracing the origin of the judicial systems to the colonial era. Two notable differences have been underscored with regards to comparing the American and Indian subcontinent colonies.
“First, while the American colonies were largely established and inhabited by European settlers, the Indian colony remained dominated by native groups that historically lived on the land. Second, the colonial period of rule in the American colonies was far shorter in time than British rule of India, which began in the late seventeenth century and extended up until 1947. On a spectrum of judicial activism today, the Supreme Court of Pakistan stands at one end, the United States at the other, and the Supreme Court of India takes a place somewhere in between.”
Beginning with the interventionism of the Supreme Court under Chief Justice (CJ) Chaudhry Iftikhar and culminating in the apex court’s impact on the elections last month, the book analyses the political developments in the country through the judicial lens. To begin with, it was necessary to arrive at a clear definition of the phrase, ‘judicial activism,’ despite the fact that there is general disagreement over its meaning. Waris Husain brings forth a multi-pronged definition that focuses on the court “willing to invalidate statutes,” “departing from text and precedents,” “changing public policy,” “asserting itself against an elected branch of government,” or “abusing unsupervised power.”
While contrasting the judicial progress in the three countries, the book highlights the influence of colonial courts, which were largely rejected in American colonies, but not in the Indian ones.
The influence of the British jurist, Lord Edward Coke, whose suggestion in 1610 that the courts had ‘the power to judge the parliamentary acts’ violation of natural laws, forms the heart of his theoretical influence in the judicial set-ups of all three countries.
The comparison of the constitutional structure of the countries is important – presidential in the US and a presidential-parliamentary system in India and Pakistan – even though all three countries, in theory, uphold constitutional supremacy over legislative supremacy. But with the book focusing on Pakistan, it reaffirms the socio-political factors that separate Pakistan from the other two countries, most notably the influence of the military.
How the three apex courts filter petitions is also an important discussion in the book, with the Pakistani Supreme Court’s generous use of suo motu notices narrated in detail, with the frequency of the action depending largely on the individual inclinations of the serving Chief Justice (CJ). For instance, CJ Sheikh Riaz took six suo motu cases from 2002 to 2003, while CJ Chaudhry took 123 between 2005 and 2013. Justice Chaudhry’s successors, Tassaduq Jillani and Nasirul Mulk, used the suo motu during their tenures from 2013 to 2014 less than ten times each. “While the United States Constitution limits the Supreme Court to decide “cases and controversies,” the Pakistani and Indian Supreme Courts can take up any issues relating to a fundamental right of public importance. This creates a much wider area for the courts of the Indian subcontinent to exercise judicial review.”
At the heart of The Judicialization of Politics in Pakistan is the comparison of three prominent cases in Pakistan, India and the US, where the Supreme Court dealt with the prospect of disqualifying heads of state/government and the contrasting manners in which each case was dealt with by the respective Supreme Courts.
While the top courts of India and the US exemplified restraint, Pakistan’s Supreme Court unilaterally disqualified serving premiers Yousaf Gilani and Nawaz Sharif, bypassing the parliamentary process for disqualification, which has been mandated by the Constitution. In Indira Gandhi’s case, the Indian Supreme Court of India demurred and dismissed the charges of corruption but overturned a constitutional amendment to justify emergency rule, while in President Richard Nixon’s trial, the US Supreme Court left the actual impeachment to the Congress.
“A comparison of the Gilani, Gandhi and Nixon cases demonstrates the need for Pakistan’s Supreme Court to structuralise and restrain its judicial review process, especially when it relates to the disqualification of a democratically-elected prime minister.”
Finally, the author advises the Pakistan Supreme Court to adopt a more self-restrained approach in cases pertaining to the civilian elected branches, by offering a standardised procedure which gives due consideration to Pakistan’s unique socio-political factors. The apex court is urged to amend the Supreme Court Rules, while calling for a commission to investigate changing the Rules and to establish the Justiciability Council. But the author cautions that while the move would mean the Supreme Court establishing its own institution for restraint, the Council’s creation would hinge on the CJ calling for it. “If the judiciary were to take this step itself, the often-repeated claim that any control exerted by Parliament over the Court’s exercise of judicial review endangers judicial independence could be invalidated.”