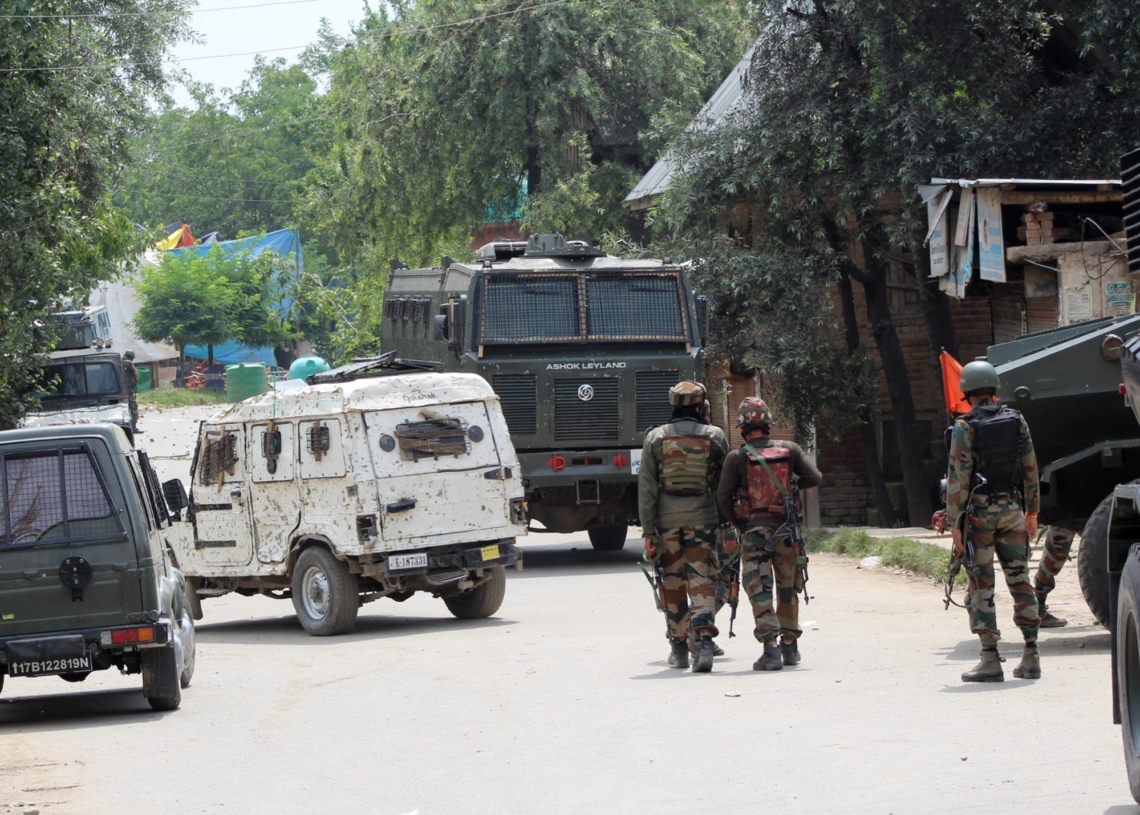 Srinagar, July 10: Two militants and an 18-year-old youth were killed and over 50 civilians suffered injuries in government forces action during intense clashes near encounter site at Kundalan village of south Kashmir’s Shopian district on Tuesday.

Two army soldiers including an officer (JCO) were injured during the initial firefight and were taken to military hospital Badamibagh, Srinagar.

Reports said that Tamsheel Ahmad Khan (18) son of Khursheed Ahmad Khan of Vehil, Kachdora sustained a critical bullet wound in his head in forces action during the clashes in Kundalan.

Khan was shifted to District Hospital Shopian where from he along with seven other persons having bullet injuries were referred to different hospitals in Srinagar.

Khan was taken to SMHS hospital here where doctors declared him dead on arrival, they said.

A senior doctor at SMHS hospital also confirmed the death of the youth. He said that the youth had received serious firearm injury.

Over 50 protesters, seven of them with bullets and others with pellets and tear gas shelling were injured during clashes near the encounter site.

Meanwhile, thousands of mourners including men, women and youth shouted pro-freedom slogans while the local militant Sameer and the civilian Tamsheel Ahmad Khan was being taken for final journey in their respective villages, they said adding that the duo was laid to rest amid sobs and tears in respective martyrs’ graveyards.

A spontaneous shutdown was observed in Shopian and its adjoining areas. All business establishments establishment were closed while as transport remained off the roads.

The gunfight started after the joint team of Army, SOG and CRPF launched a cordon and search operation in the area.

A police spokesman said that pursuing credible leads regarding the presence of militants in Kundallan village, a joint patrol of the security forces launched searches in area in the wee hours today.

“As the searches were going on, the militants hiding inside the house fired upon the search party leading to an encounter. Some of the civilians in the nearby houses were quickly evacuated by the security forces,” the spokesman said.

During the encounter both the hiding militants were killed and have been identified as Sameer Ahmad Sheikh son of Ghulam Mohammad Sheikh resident Rawalpora Shopian and Babar from Pakistan. They were affiliated with JeM outfit, the spokesman said.

Sameer, the local militant was a school dropout and had joined the outfit JeM after he was reported missing from his home since April 2018, the spokesman said.

“On the basis of documents available the other militant has been identified as Babar a JeM commander of Pakistan origin. They were involved in many

attacks on the security establishments and civilian atrocities,” the spokesman claimed.

Some civilians were also injured in cross firing at the site of encounter who were later evacuated to the hospital for medical attention. One of the injured persons later succumbed to his injuries while the other injured are stated to be stable now, the spokesman said.

Police have registered a case and investigation has been initiated in the instant matter, he said.

Hearing his son is trapped, father dies of heart attack

Srinagar, July 10: A middle aged person died of cardiac arrest on Tuesday after learning that his militant son was trapped in gunfight with the government forces in Shopian district of south Kashmir.

According to reports Mohammad Ishaq Naikoo, father of Zeenat who had just joined militant ranks, died after hearing that his son was trapped in the gun battle in Kundalan village.

Naikoo, a resident of Memander village of the district was shifted to district hospital Shopian where doctors declared him dead on arrival.

Meanwhile, sources said that the rumour about the presence of Naikoo’s son was not true.