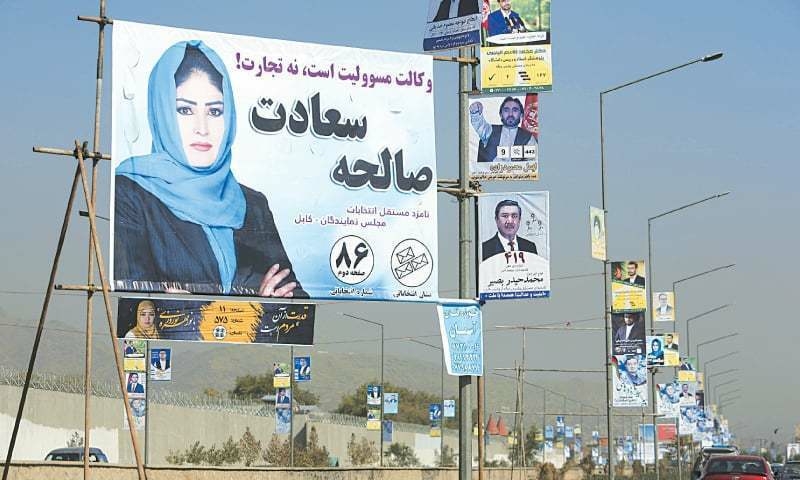 KABUL: The Taliban directed Afghans to boycott upcoming parliamentary elections and demanded a complete withdrawal of foreign forces as the only solution to end the 17-year-old war as they ramped up attacks in strategic provinces.
The statement from the Taliban coincided with the visit of top US envoy Zalmay Khalilzad, who has been appointed to lead peace efforts with the Taliban.
Khalilzad met President Ashraf Ghani in Kabul to discuss ways to hold Afghan-led peace talks with the Tal­i­ban, whose 1996-2001 rule was ended by US-led troops.
“Peace is a holy process, and the US government and people are united with the Afghan government and people in this process,” Kha­­lilzad was quoted by Ghani’s office in a statement as saying.
Khalilzad, an Afghan-born former US ambassador to Afghanistan and Iraq, joined the US State Depar­t­ment team in September.
He is scheduled to visit Pakistan, the United Arab Emirates, Saudi Arabia and Qatar this week as he seeks to bring the Taliban to the negotiating table. But the Taliban have rep­e­atedly rejected offers to hold peace talks or support the polls.
The Oct 20 vote, seen by international partners as a dry run for presidential elections next year, has been hampered by chaotic preparations, allegations of fraud and ever-present fears of militant violence.
Zabihullah Mujahid, the Taliban’s main spokesman, said the United States was using the elections for the sole purpose of legitimising their presence and authority.
On Monday a ministry of defence statement said Afghan forces had killed more than 120 Taliban fighters and other militants during 20 operations, including 17 air strikes in various parts of the country.
More than 30 Taliban fighters were wounded in air strikes conducted in Ghazni, Kandahar, Farah and Faryab provinces.
Our correspondent adds: As the United States entered the 18th year of its military presence in Afghanistan on Monday, Taliban insurgents killed 54 people across the country, while in Washington commentators urged the Trump administration to define an exit strategy.
The United States needs “a pragmatic, workable exit strategy from Afghanistan”, says Robert A. Manning, who worked for more than 12 years as a policy planner for the US Department and the National Intelligence Council.
“[Exit] is the least dishonourable way for the United States to turn the page and step out of the graveyard that, from the time of Alex­ander, has buried empires,” he wrote in a piece published in the Foreign Policy magazine on Monday.