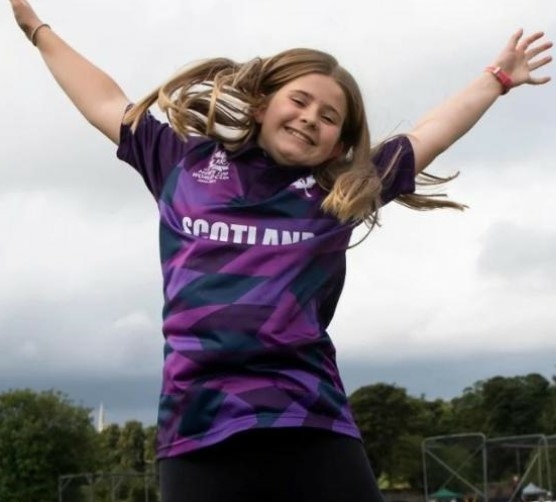 A 12-year-old girl is breaking the internet for designing Scotland cricket team jersey.Rebbeca Downie who lives in Haddington, East Lothian, has created quite a flutter after Cricket Scotland tweeted her a picture wearing the jersey.

“She was following our first game on TV, proudly sporting the shirt she designed herself. Thank you again, Rebecca,” Cricket Scotland tweeted while sharing a picture of Rebecca wearing the jersey herself.In the picture, the 12-year-old is smiling while standing before a TV set playing Scotland’s match.

Scotland’s jersey has multiple shades of purple, with the country’s name printed across the front in white. Several users were also surprised to know that the Scotland cricket team’s jersey designer is actually a 12-year-old girl.

Meanwhile, Scotland led by Kyle Coetzer started their T20 world cup journey by handing over a shocking defeat to Bangladesh considered a favorite in group B. The associate nation was at 53/6 at one stage, but fought back after Chris Greaves (45) stabilized the innings with the help of Mark Watt (22).Greaves rescued Scotland with the ball as well as he dismissed Shakib Al Hasan and Mushfiqur Rahim at crucial stages to ensure Bangladesh fell short of chasing 141. Scotland ultimately won the match by six runs.

Scotland continued the winning momentum in its 2nd match against Papua New Guinea as it defeated the inexperienced country by 17 runs. Its next match is against Oman on Thursday.