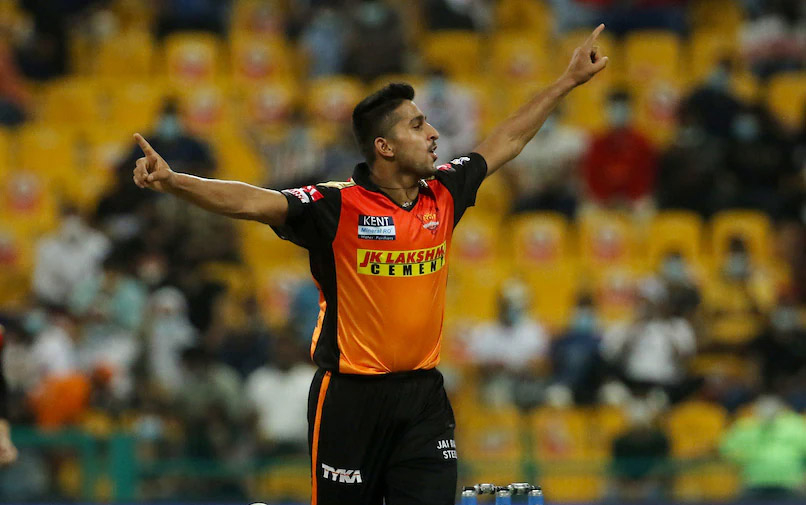 New Delhi, Oct 9: After impressing one and all with his speed, Jammu and Kashmir pacer Umran Malik has now been chosen as Team India’s net bowler for the upcoming T20 World Cup.

Malik had recently played for the SunRisers Hyderabad (SRH) in the Indian Premier League (IPL) 2021 and he also ended up recording the fastest delivery of the season.

“Yes, he will be staying back with the team as net bowler. He was impressive in the IPL and we feel it will be a good idea to have the batsmen face him at the nets. It will also be a good exposure for him to bowl to the quality batsmen like Kohli and Rohit,” a source said.

Earlier, pace sensation Malik had said that bowling fast comes naturally to him and ever since the starting, he has bowled quickly to disrupt the batters’ concentration.

SRH pacer Umran Malik clocked 153 kph to bowl the fastest delivery of IPL 2021 against Royal Challengers Bangalore on Wednesday. Malik achieved this feat in the fourth delivery of the ninth over against Devdutt Padikkal.

In 2018, U-19 trials came and I was bowling, the selectors saw me. I was bowling with jogger shoes, then my friend gave me spike shoes and I then came into the U-19 team. Then I played Under-23 cricket,” Malik told teammate Bhuvneshwar Kumar in a video posted on iplt20.com. “In 2018, I was practicing regularly.

After Under-23, I played Vijay Hazare and Ranji Trophy. I thank the SRH franchise for giving me an opportunity. Irfan Pathan came and he told me where I can improve. I was scared at first when I had to bowl to Warner and Williamson in the nets. I prayed to God that I just bowl good balls. I kept on learning and this has helped me,” he added.