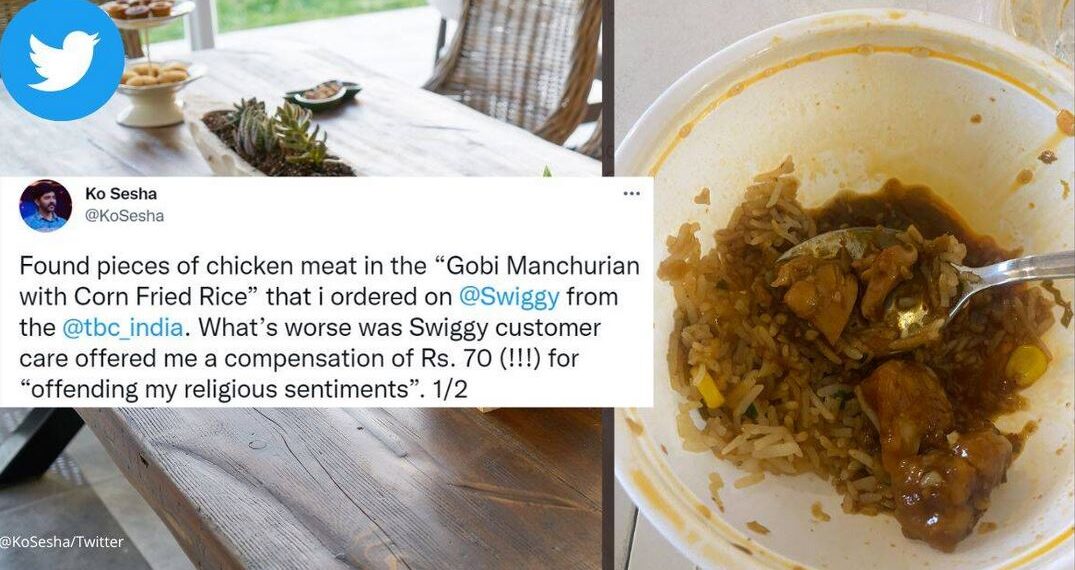 Ko Sesha, a Tamil lyricist and dialogue writer has slammed Swiggy for hurt his religious sentiments by serving chicken pieces in a vegetarian dish.

In a now viral tweet and photo he shared, Sesha said he had ordered gobi manchurian with corn fried rice from The Bowl Company, a Swiggy venture, but got chicken pieces in the dish.

“I’ve been a strict vegetarian all my life & it disgusts me to think how casually they tried to buy my values,” he tweeted.

He also wrote that a customer care executive of the online food aggregator offered him Rs 70 as compensation for “offending my religious sentiments”. “I demand that a representative of Swiggy, no lesser than the State Head call me to personally to apologise. I also reserve my rights to a legal remedy,” he said in another tweet.

The tweet has received thousands of likes and lots of comments. “It doesn’t even look like chicken. How do you know it’s chicken ? You’ve tasted chicken before ?” a user commented.

Replying to him, Sesha wrote, “Two non-vegetarian friends who were next to me tasted the pieces & confirmed. I still have the pieces BTW. You can come, taste and confirm for yourself.”

“So many geniuses here are commenting what else to do expect if you order from a multi cuisine restaurant. What kind of logic is this? Why have veg and non veg written on the store front?” another user wrote.

“For all those who are saying why did you order from the non veg restaurant at first place. I have come across a cloud kitchen in my vicinity where they have two brand names in swiggy and Zomato. One brand sells veg and other sells non veg. Both of them have a same kitchen,” yet another user wrote.