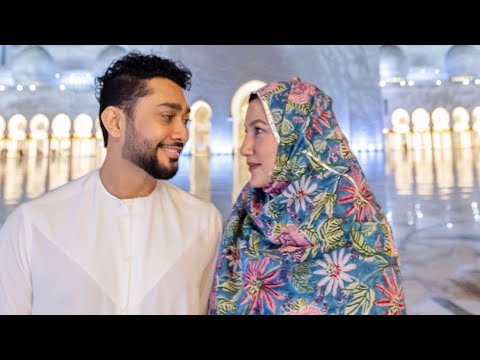 If Sana Khan can do it, can Gauahar Khan be far behind?

Accompanied by her husband, she took a tour of the mosque and clicked pictures with her fans and Namazis. She gave a running commentary about the intricate design and experience at the mosque.

“We are entering Asia’s biggest mosque. The Grand Mosque of Abhi Dhabi. Here is my husband… Mashallah! Look at that,” she said.

The Bigg Boss 7 winner was wearing a white Abhaya. She covered her head with a floral scarf. “Aassa laga raha hai, koi set laga hu hai,. . Itna khoobsurat, itna unbelievable hai…SubhanAllah, it was the most amazing experience at the Grand Mosque. May Allah bless us all. May Allah give us health, wealth, and success,” she said.

She has posted the video on her YouTube channel and it has notched 1.1 lakh views so far.

A few days back, Gauahar Khan took on a troll who raised the `four wives and girls education’ issue to pin down the actress.

“Outside world doesn’t know that India still has separate family laws for Hindus&Muslims. Hindus have to abide by the secular code. Muslims can have 4 wives &ban education for their wives & girls in name of Sharia. #UniformCivilCode has to apply to ALL Indians,” the troll said.

Gauahar hit back with equal ferocity to silence the troll. “Hey loser! I’m a Muslim, and nobody can ban us from having our rights, India is secular, it’s a democracy, not a dictatorship like u would desire! So stay put in the comfort of your American status, n stop inciting hate in my country!” she said.

A maroon base woven shawl covered in ethnic paisleys and floral patterns embroidery complimented the dress. Adding to ethnic looks was a pair of long silver earrings.