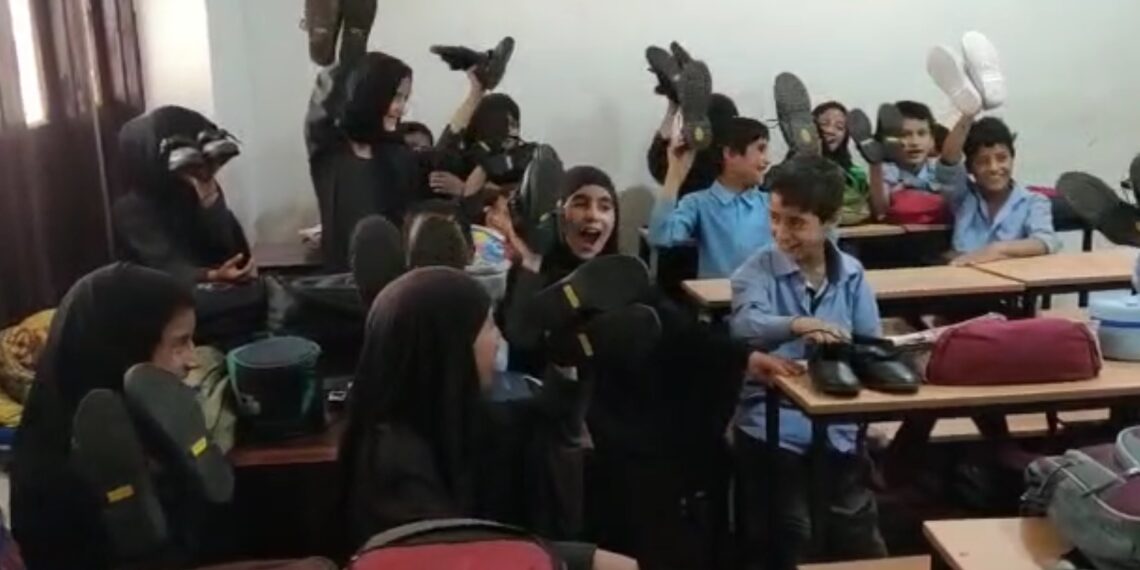 SRINAGAR:  Inside a rundown classroom at Government Middle School, Waiendar, there was an unusual hustle and bustle on a sunny July morning. Students were giggling and whispering to each other. Minutes later, teacher Zubair Ahmad Khan entered the classroom and introduced a hairdresser to the students.

“Say hello to uncle! Today, you will get a haircut,” he said.

Students’ joy knew bounds as they had been without a haircut for months. Poverty, inaccessibility, and economic backwardness have had a cascading effect on the students in this remote area of south Kashmir.

Most of the students belong to improvised tribal families who have no means to even pay for small things. Some students have to walk 12 kilometers to reach school. Such is the state of affairs that they wear plastic boots even in sweltering summers.

“I had been observing them for months. They had long hair and some had even locks. I could not ask them to get haircut given their economic condition. So I consulted my staff and it was decided that we will get them a haircut,” Khan said.

Since the school is located in the foothills, there was no hairdresser in sight. Khan went to the Kokarnag town and hired a hairdresser. “I paid a hairdresser and brought him to the school. There is a brook near our school. A chair was placed on its bank. Students were called one by one and given a haircut,” he said.

What is more heartwarming is that Khan paid the hairdresser from his own pocket. “I see a reflection of my childhood in them. They deserve better. Paying a little amount from my salary is not a big deal. I want them to prosper,” he said.

Students were so happy that they demanded haircut every month. “We can’t afford Rs 50 for a haircut. We want sir to arrange haircut monthly,” said a student.

Others were running hands through their hair to check out their style. “Bhut maza aya, style banake,” said another.

Khan has been a trendsetter in the education department.  Last year he became an internet sensation with his unique singing-style teaching. Netizens named him `singing sir’ for motivating students.

What makes Zubair stand out is that he spends some part of his salary on students so that they do not feel ignored or deprived.

Some weeks ago, he and his colleagues arranged 128 shoes for students. “We are five teachers in the school. We pooled money and bought comfortable leather shoes for the students. They were using plastic shoes in the scorching heat because their parents could not afford leather school boots,” he said.