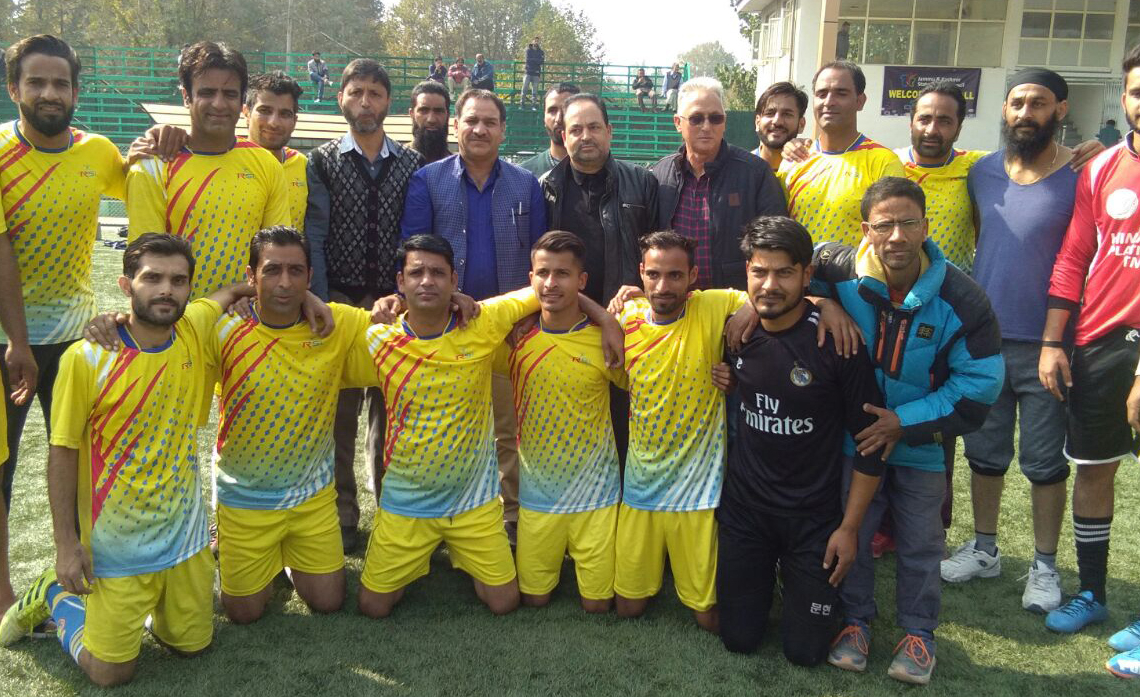 November 11, 2017. 15th Police Martyr’s Memorial Football Tournament scheduled match between JK SRTC Vs. DFA Pulwama. Result?  JKSRTC XI emerges victorious over Pulwama in a tie-breaker with 4:1. Scores apart, it is revival of the old horse, but it is half-revival only.

It is mid-May and the one and only Pologround, surrounded by mesmerizing chinars and weeping willows, is trampled by a huge rush of football players – both amateur and professionals – every morning. Having already lost the much needed natural grass, it is saddening to see 2-inch puff of dust in the main football ground where most of the professional teams including the revived SRTC team is seen practicing as part of the preparations for the ensuing football season. SRTC team looks half-revived though!

Once invincible, J&K State Road Transport Corporation football team popularly known as the ‘Transport team’ has made a comeback in the state football arena after lull of a few years.

Founded in the year 1962 – thanks to the initiative of ex-president J&K Football Association – Nazir Ahmad Khan then a gazette-class officer in erstwhile Government Transport Undertaking – an amalgam of Transport, Traffic and State Garages, present SRTC team has a rich history. Besides employing almost every football player in 60s, 70s and 80s, Transport team boasts of being the only departmental which had its own team practice ground within the Polo Ground exactly opposite to its Corporate Office. Unfortunate for the game of football, the ground has been taken over by the J&K State Sports Council and converted into rubgy field. Even the small SRTC building within the Pologround once the change room for SRTC players lies in dilapidated condition.

Undoubtedly the first football nursery of the state, contribution of the Transport team has been phenomenal in grooming all the legendary players including but not limited to Mohammad Yousuf Dar, Late Farooq Ahmad Dar, Abdul Majeed Kakroo and many others, which the team continued to do for decades. While late Farooq Ahmad Dar is unforgettable for his ferocious shooting power, Mohammad Yousuf Dar- charismatic striker was a different class.

Talking on his career, Yousuf says, “In the year 1962, as a young boy still studying in class 8th, I was one of the four players lured by the Government Transport Undertaking from S.P. college/ S.P. school to join its official football team. Simultaneously, I was offered a lower-grade job in the undertaking and with time the grade was steadily enhanced. It was in J&K SRTC football team that I grew from ‘Nikkae Dar’ to ‘Yousuf Dar” and ultimately legendary ‘Mohammad Yousuf Dar. I have so many memories to cherish during my career. Apart from being considered as one of the best strikers, I was a serious student as well. Despite all odds of being a footballer, I made sure that I attain both Bachelor’s and Master’s degree from University of Kashmir due to my hard work and dedication. While summers were full of football practice and tournaments, I would use the winter times for studies and the result, I reached the apex of my service career and retired at a dignified position.”

When asked about his achievements, Yousuf said, “count my achievements and I see it should at least include myself being the first international footballer of the state and the success of my sons – Majid and Sajid – in the football arena.”

Likewise, Abdul Majeed Kakroo attributes his success to his association with J&K SRTC at the beginning of his career. According to Majeed, incidentally in 19977, then unknkwown Abdul Majeed Kakroo had only accompanied Mohammad Shafi Naari – another J&K SRTC great – for tour to Jammu. It was due to a number of injuries to the J&K SRTC team that gave Abdul Majeed Kakroo an opportunity to exhibit his football skills and from there he never looked back. On return, Abdul Majeed Karoo was offered a daily wager contract with a monthly remuneration of Rs. 280/- per month and he joined the team as striker. Majeed continued to play for SRTC team from 1977-1980 along with legendary striker Farooq Ahmad Dar. Remembering 1979-80 Durand Cup in Delhi where J&K SRTC team reached quarter-final after defeating teams like Rajsthan club, Air India etc., Majeed says, “ During his Durand Cup, I scored a total of 18 goals for J&K SRTC team and it was on the basis of this phenomenal performance in the Durand Cup that I was selected for Indian National Team for participation in the 1982 Asian Games held in New Delhi.”

Regarding the contribution of J&K SRTC team to the football arena of the state, Majeed says, “all the cream of J&K Football was part of the SRTC team and every good player has rises from J&KSRTC including Farooq Dar, Yousuf Dar, Bill Dar, Yousuf Baba, Abdul Rashid Khatei, Mohammad Hanief, Shafi Naari, Mushtaq Dalal, Mohammad Abdullah, Ghulam Hassan & Gulzar Ahmad (Goal keepers), Manzoor Ahmad Qazi etc. Moreover, during late 70s and 80s, it was only J&K SRTC football team that used to participated in all major tournaments outside the state including Durand Cup, Rovers Cup, Federation Cup etc.”

According to Majeed, in 1982, 5 major players of including Majeed Kakroo, Shafi Naari, Nazir Goalkeeper, Hussain and Latief left J&K SRTC to join lucrative offer from J&K Police team, which lead to the decline of the performance over the next few years.

Mir Abdul Jaleel who joined J&K SRTC team as defender in 1988 from a local club – Cosmo FC – continues to be associated with the team till date, in the coaching capacity now. Contracted with a renumeration of Rs. 1100 per month, Jaleel was regularized in 1989. Jaleel says that he continued to play actively for the team till 1990 after which the turmoil forced suspension of footballing activities in the state. It was not until 1995 that the team was revived and Jaleel continued to play for the team till 2008 at different positions.

According to Jalee, “During my tenure as a player, J&K SRTC team dominated the state football arena and won almost all tournaments including League, Knockout, Saiffudin Memorial etc. However, over the years, the performance of the team has witnessed a steady decline due to many factors including aging of the players, lack of incentives, infusion of fresh talent etc. Moreover, better opportunities to many players like Hanief, Tanveer, Showkat who joined J&K Bank as well as Sandeep, Pat, Yaseen etc who joined J&K Police has also lead to the drain of talent from the team.”

Senior players including Rayees and Sajjad – both hailing from Barbarshah area of Srinagar- joined J&K SRTC team in 1999 and 2004 respectively. Sharing his rich experience of 14 years with J&K SRTC, Sajjad says “While I had the offer to choose between J&K Police team and J&K SRTC team, I preferred then glamorous and promising J&K SRTC team since my father – himself an employee of J&K SRTC – dreamt of his son in SRTC jersey. Moreover, in 2004, this team looked more promising than any other team in the state. However, over the years I have felt that it has not been able to be keep up with the pace of J&K Bank, J&K Police and other departmental team. Moreover, lack of facilities and clear job policy within the Corporation has impacted the morale of the players.”

Similarly, Rayees a talented mid-fielder capable of playing at striking positions as well – has remained the captain of the team for the period from 2004-2013 has the same story of up and downs of the team to tell. To mention, Rayees remembers his team mate – late Shabir Ahmad Dar popularly known as the Train of Kashmir – as the fastest footballer the state as ever produced – who scored the astonishing goal against Titanium Kerala FC in 2012 in an All-India level tournament in Chattisgarh, that lead his team to win the match.

Present SRTC team is the true reflection of struggle for survival of once prosperous state PSU. I am told that the team has a strength of around 12-14 players against the standard of 20-24. The physical profile of the precipitating players signifies their aging and at the same time, call for infusion of fresh talent to augment the experience and also to attain the proper mix of energy and experience within the team. Apart from the basic training equipment, the team reportedly does not have a qualified physio for fitness training as well. In absence of these basic facilities, lack of motivation for excellence in performance is but obvious. The resumption of activities of J&K SRTC team – are appreciable – yet it is only in half-revival mode!

In an interplanetary first, NASA to fly a helicopter on Mars as part of 2020 mission