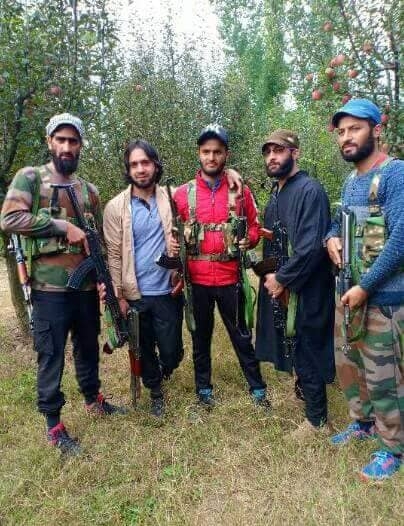 Srinagar, Oct 1: Special police officer (SPO) Adil Bashir who fled with seven rifles and a pistol from the residence of a PDP legislator in Srinagar has reportedly joined Hizb-ul-Mujahideen.

The pictures of Bashir in which he can be posing with a gun along with other members of the Hizb-ul-Mujahideen, including top commander Zeenat-ul-Islam have gone viral on social networking and messaging websites.

The photograph where Adil is seen wielding a gun also has a Hizb ul Mujahideen tag written in Urdu.

On Friday night, police said that Bashir has fled with seven rifles and a licensed pistol of the legislator Aijaz Ahmad Mir from his residence at Jawahar Nagar Srinagar.

A picture of the seven rifles has also gone viral on social media.

“We have cracked the (Jawahar Nagar) case. The SPO had executed the plan with the help of a civilian who also hails from Shopian district. We have identified the civilian and he will be arrested soon,” Additional Director General of police (L&O) Munir Khan was quoted in a local media report.

Asked whether a photograph released on social media showing SPO Adil carrying a gun, with four more weapons in his background, was authentic, Khan, as per the report, said that though the police are investigating the veracity of the photograph, “it was expected that Adil would join Hizb ul Mujahideen.”