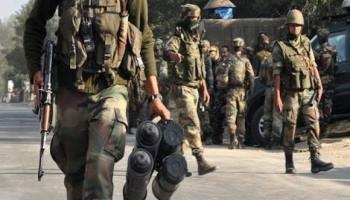 Srinagar, July 11: An army commando was killed and another suffered injuries in an ongoing gunfight at Kandi forest area of north Kashmir’s Kupwara district on Wednesday.

An army officer said that Wednesday afternoon the Army soldier of 4 PARA namely Sepoy Mukul Meena sustained serious bullet wounds in the gunfight at Sadu Ganga forest area of Kandi and was evacuated to military hospital Drugmulla where doctors declared him brought dead on arrival.

One more army man is said to have received injuries, however, his condition is said to be stable, he said.

The operation was launched in the area on late Tuesday after army’s 47 RR and the group of militants had a stand-off, the officer said.

He said that the militant group later managed to flee from the area, however, on Wednesday in the afternoon was again intercepted with the help of additional reinforcements of army’s 4 PARA commandos.

The officer further said that the operation in the area is ongoing.