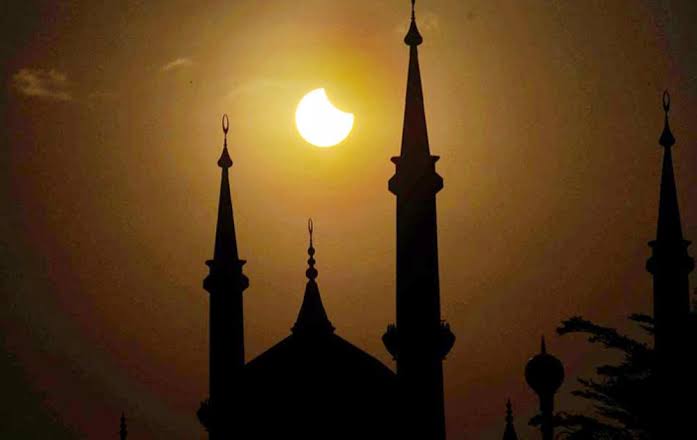 JEDDAH: Prayers were held in holy mosques across Saudi Arabia on the occasion of the solar eclipse in accordance with Prophet Muhammad’s (PUBH) traditions.

Arab News reported that prayer and solar eclipse sermons were held at the Grand Mosque in Makkah by Sheikh Bandar Baleelah at 1:45 p.m. Prayers were also held by most mosques in the Kingdom following Prophet Muhammad’s traditions.

Majid Abu Zahira, head of Jeddah’s Astronomy Society, said that a partial solar eclipse occurs when only part of the sun is covered by the moon, making it appear as if a portion has been removed.

“During such an eclipse, the semi-shadow of the moon is passing over us, where the apparent diameter of the sun will be 0.6 percent larger than the average, and the moon will be only four days before perigee, which will make it relatively large at the great peak of the eclipse, but this does not have a real effect on this eclipse because it is a partial one,” Majid was quoted by Arab News as saying.

The eclipse was observed in the Kingdom with approximate matching timings and degrees, starting with Jeddah, where the partial eclipse lasted for two hours, and six minutes, starting at 1:32 p.m. It reached its greatest peak at 2:38 p.m., with a percentage of 21.5, and ended at 3:38 p.m.

However, the eclipse was not visible in other Arab capitals, including Algiers, Rabat, Nouakchott, Moroni, and Mogadishu.

The partial solar eclipse will be followed by a total lunar eclipse two weeks later on Nov. 8. It will be visible from the west coast of the US, Australia, and Southeast Asia, but not in the Arab world.