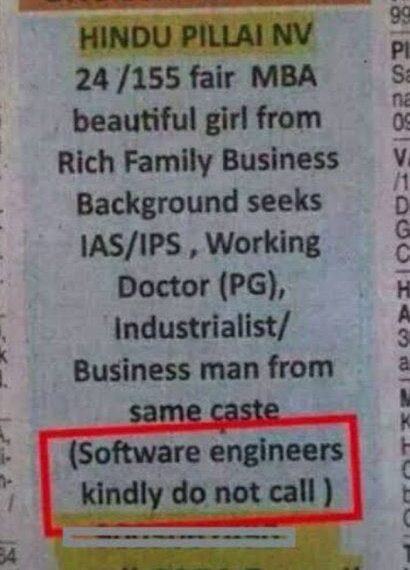 In the advertisement, people were looking for a groom who must be an IAS/IPS; working doctor (PG); industrialist/businessman. What raises an eyebrow was the special instruction at the end. “Software engineers kindly do not call,” reads the instruction.

The person, who shared the image wrote: “Future of the IT does not look so sound”. The viral post was shared by businessman Samir Arora on Twitter.

The post has gone viral for all the wrong reasons. The family which issued the ad also sought a groom from the same caste which makes it stinky given the prevalence of casteism in affluent societies as well

It seems that the person who posted the ad thinks that software engineers working in the IT sector do not have a great future even though they earn quite a lot as well.

“Looking at the ad, the whole country’s future doesn’t look so sound,”  wrote a user.