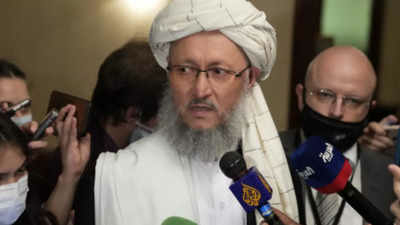 Hopes of a thaw have rekindled after India and Taliban held second official meeting on the sidelines of Moscow Format talks.

Taliban said the Indian side had “finally” expressed readiness to provide extensive humanitarian assistance to the Afghans.

While the Taliban side was led by deputy PM Abdul Salam Hanafi, the Indian delegation was headed by MEA joint secretary J P Singh, who handles Pakistan Afghanistan and Iran, and his colleague Adarsh Swaika, who is in charge of the Eurasia division.

Taliban also said that both sides considered it necessary to take into account each other’s concerns and improve economic and diplomatic relations. Moscow Format talks saw participation by Taliban and 10 countries including India. It emphasised for the need to have an inclusive government in Afghanistan.

Russian foreign minister Sergey Lavrov said the interests of all ethnicities and political forces for sustainable peace and national reconciliation. Apart from India, all other participants too had separate meetings with the Taliban.

Moscow talks also saw Taliban reaffirming their commitment to not allow the Afghan territory for use against their neighbors.

There was no official confirmation by India of the meeting until late in the night. Taliban have continued to maintain radio silence over their meeting with Indian ambassador to Qatar Deepak Mittal in August, their first official engagement with India. The humanitarian aid offered by India, as announced by the Taliban, follows PM Narendra Modi’s call in his G20 address for urgent and direct assistance to the Afghan people and an inclusive administration to avert a humanitarian crisis.

Expressing concerns about the activities of proscribed terrorist organizations in Afghanistan, the participating countries also reaffirmed their willingness to continue to promote security in Afghanistan to contribute to regional stability, according to a joint statement issued after the talks.

They were pleased to note, according to the statement, the reaffirmation by the interim Afghan government of its previous commitments to prevent the use of the Afghan territory against its neighbors, other States in the region, and the rest of the world.

Moscow Format talks were attended by, among others, China and Pakistan. The US though did not participate on this occasion. The meeting expectedly called for consolidated efforts to provide urgent humanitarian aid and endorsed Russia’s proposal for a UN conference on the humanitarian crisis that Afghanistan was facing.

In this context, according to the joint statement, the participating countries proposed a broad-based international donor conference under the UN as soon as possible, “certainly with the understanding that the core burden of post-conflict economic and financial reconstruction and development of Afghanistan must be shouldered by troop-based actors which were in the country for the past 20 years”.