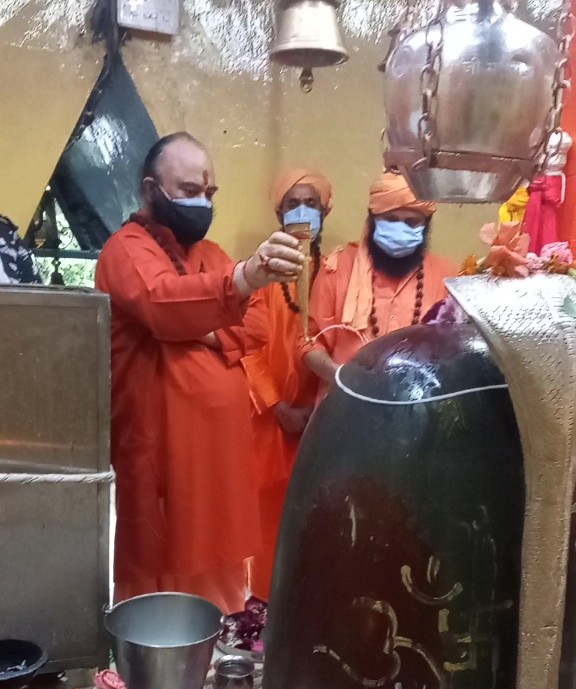 Srinagar: ‘Chhari-Mubarak’ (holy mace) was taken to the Shankaracharya temple here on Thursday for prayers on the occasion of ‘Haryali-Amavasya’ (Shravan Amavasya).

Led by Mahant Deependra Giri, a group of sadhus offered pooja at the temple as per the age-old customs related to the ongoing Amarnath yatra.

“The sound of a conch shell charged the whole atmosphere. Pujan was performed chanting Vedic hymn. Sadhus who accompanied Holy Mace participated in the prayers that lasted for more than two hours. Collective prayers were also offered for peace and prosperity of Jammu & Kashmir. The summit of the hill is crowned with a picturesque edifice. This hill was called Jetha Larak and afterwards it was named Gopadari Hill. Some historians are of the opinion that the temple at the top was originally built by King Sandiman in 2629-2564 BC,” the Mahant said after the pooja.

“This temple was, earlier, known as Jyeshteshwara or Jyoteshwara temple. But after Adi Shankracharya Ji visited this temple, it is now, popularly known as Shri Shankracharya Temple. Chhari-Mubarak shall be taken to ‘Sharika-Bhawani’ Temple, Hari Parvat, Srinagar to pay obeisance to the Goddess tomorrow,” he added.