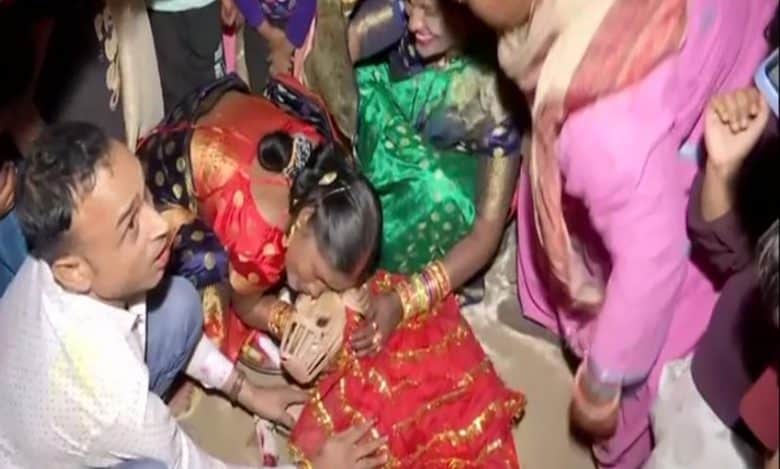 Gurugram: A couple got their pet dog married to a neighborhood canine in Gurugram.

Sheru (male dog) and Sweety (female dog) took the ‘Pheras’ today. According to the pet owners, for the marriage, 100 invitation cards were sent to a neighborhood of Jile Singh Colony in Palam Vihar Extension, as they attended the marriage ceremony as ‘Baraatis’.

Savita alias Rani, guardian of a female dog named Sweety said, “I m a pet lover and as a couple, we used to take care of pets. I don’t have a child so Sweety is our kid. My husband used to go to the temple and feed animals and one day a stray dog followed him and came to us 3 years back. We named her Sweety. everyone used to say that we should get Sweety married. We discussed it and then eventually a program was made in just 4 days. We decided to follow all rituals.”

Savita did mention that ceremonies like Haldi were also done for both the dogs, while she was displaying her Mehendi.

Manita, owner of the male dog Sheru said,” We have been together with Sheru for the last eight years. We have always treated him like our child. we discussed with our neighbors about the marriage of our dogs casually but then we suddenly got serious about it.”

Manita asserted that the owners of the dogs are taking this marriage seriously and prepared for it just like customary marriages and followed all the rituals.

“We invited around 100 people. We printed 25 cards and the rest was an online invitation,” Manita added.

When asked how other people reacted to the invitation, Manita said, “Some people like it and some people don’t. We are not concerned at all. We just followed what we desired.”

On similar lines, Savita mentioned, “People used to say that police will pick us and put us in Jail but we are not bothered. Since we are a childless couple and this is our only happiness so today my husband is happy as we are getting Sweety married.”

Raja, a tea seller, and owner of Sweety was emotional during the ceremony and narrated the whole incident,” I used to visit the temple and since we don’t have a child then we used to take care of the pets. Sweety has been part of our lives for the last three years and she is like my daughter.

For preparation, we have bought the utensils and sarees which we do for usual wedding preparation. I will feel bad as a father because for three years I have nurtured her as a guardian.”

The marriage ceremony was accompanied by ‘dhols’ and people danced with full enthusiasm for the canine wedding. (Agencies)