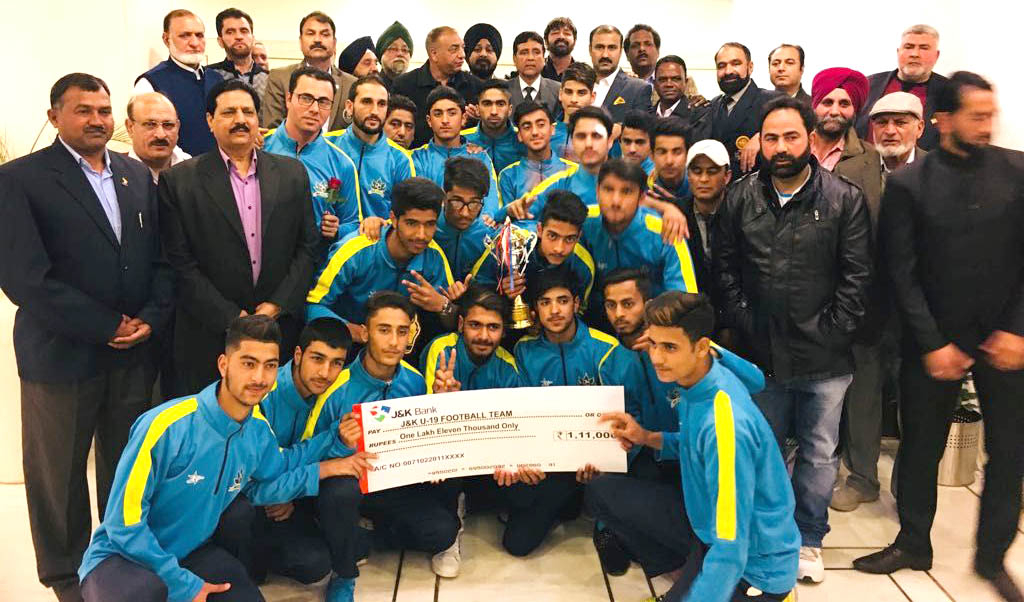 Visit Kashmir’s downtown, yousmell teargas.At the heart of itis Razaey Kadal (sadly fashioned into Rajouri Kadal) the emblem of resistance. Watch TV and you see footages of Friday clashes where downtownyouth are portrayed as stone pelters. While this part of my land has lost many Wamiqs, a few have been lucky to survive. One among them is the new football sensation – Shakir!

It was September last year when during the selection trials of JKSPDC’s football team, came across a young boy in the first round of Srinagar trials by the selection committee. It was Shakir, a tall dark-skinned mid-fielder, who made an impression with the first kick. He seemed to combine well with a left footer in the mid-field, perhaps they were playing for the same team. I felt we got the central mid-field duo. However, with 8 mid-field positions to fill, it was not possible to select both and unfortunately, the combined score went in favour of the left footer. Shakir was put in the waiting list. Time passed by, and Shakir was missed badly.Ultimately, he got a call from the waiting list and since then, he has never looked back.

Known to the teammates as Pogba, Shakir was born on 7th March, 2000just 13 days before the Chattisinghpora massacre, toShowkat Ahmad Sheikh andhomemaker Hafiza in Syed Sahib,Razaey Kadal. The couple had lost the first baby within a few hours of birth and hence, Shakir was a precious baby. Showkat, a craftsman who makes a living by carving designs on copperware says, “I felt that Shakir’s skin colour was not as fair as his late brother’s, but giving birth to him was a matter of utmost joy”. Despite being hand to mouth financially, Showkat made it a point to impart good education to his son.At the age of 3, Shakir was admitted to the Greenland High School, Gasiyar for primary education.

In his childhood, Shakir was a fierce bowling all-rounder in cricket and his fellow teammates would not dare to play against his team. Incidentally, Shakir’s uncle, a footballer himself, who once played for Food & Supplies team cast an impression on the young boy. It was in the Gani Memorial stadium wherechild Shakir picked up the footballing skills.

In 2009, one Amin Baba who plays for JKFA Super-division club Safalo identified football talent of the boy while Shakir was a 6th standard student. At the behest of his father, Shakir would frequently visit Gani Memorial stadium for practicing football. In the earlier years, while Shakir would go out of home for practice, his mother would get worried that Shakir may not become another victim of brutality.  Brought up in the air of teargas smoke, Shakir was a mute spectator to Friday clashes and over these years, he has adopted to the culture of teargas shelling. Time has taught him catch the safest way to Gani memorial stadium – his home ground.

Regarding Shakir’s childhood, Showkat says, “my son is a gifted child having exceptional cricket skills, but I wanted him to become a great footballer in life. While he was a class 6th boy, I bought him a Ranger bicycle so that he could reach the practice sessions in time. I also made him clear that I would sweat my blood out to feed your aim of becoming a great footballer, but at the same time, make sure that you do not fiddle with your father”.

In 2012, a local coach namely Fai Bhaya started a football academy in the famous Islamia college Hawal ground, where Shakir was selected in the first go. Shakir says, “Fai bhaya noticing exceptional talent in me used to give me extra timeafterevery regular practice session.”

In 2013, during the final of a high-school level tournament organized by Department ofYouth Services & Sports which was played between R.P. School and Greeenland School, Shakir scored a goal from 35 yards and his school team won the match. With this win, he brought laurels to his school and personally came into the limelight. This match-winning performance was a testimony to Shakir’s exceptional talent.

Within a span of two years, Shakir made it to the ‘A’ division club Iqbal Sports and in the season 2014-15, he played as a striker for the club. In the very first season, he scored a crucial goal against Novelty FC in the semi-final of the ‘A’ Division league and as a result, Iqbal Sports qualified for the next season’s Super Division. In the meanwhile, Shakir appeared in selection trialsconducted by J&K Bank Academy. After rigorous trials for 5 days, he was selected for the J&K Bank academy in 2016 and positioned as central midfielder. In the same year, Shakir was selected for Under-14 (sub-junior) national tournament in Kalyani,West Bengal under the coaching of Mohammad Shafiq where he was positioned as left winger. Playing for the State team first time in life was a learning experience for the budding footballer. This was followed by another experience of playing state national at Under-15 level in Himachal Pradesh, where he was positioned at centre back.

Over the period between 2014 and 2016, Shakir had played under different coaches who had experimented with his playing positions. However, it was in J&K Bank Academy where he consolidated his position as central-midfielder. Shakir says “The credit for grooming me into the central mid-fielder goes to Manzoor – my coach at J&K Bank Academy. His contribution in shaping me for this key position is phenomenal.” While in the bank academy, in his first match as mid-fielder against the mighty Real Kashmir FC, Shakir scored a wonderful goal and thus established his claim on the midfield position. In the same year, Shakir had the first exposure of I-League (U-16) with J&K Bank Academy and he scored a goal against arch rivals Lone Star FC. In the same year, he played I-League (U-18) for J&K Bank Academy team and matured as a player.

Year 2017 has been the year of recognition of Shakir’s talent in the football arena. Early in the year representing SP Higher Secondary School in the Urja Cup organized by CRPF, Shakir scored 5 goals in the tournament which his school won after defeating Lone Star FC in the final. In the same year, Shakir was offered a professional contract of one year bythe Premier Division JKSPDC football club, one of the top 5 clubs in the state.JKSPDC football team had served as the biggest platform of his career till date.Playing for the JKSPDC football club in the very first knock-out tournament (15th Police Martyrs Memorial Football – 2017) organised by the J&K Police, Shakir scored a total of 7 goals including a hat-trick, second highest by an individual player. The most important goal of the tournament was a scintillating free-kick against the formidable Real Kashmir FC in the quarter finals, which ensured that JKSPDC football club wins the 2nd Runners-up prize.

Lately, this wonder-boy represented the state in U-19 National BC Roy Trophy held in Himachal Pradesh in Jan/Feb 2018 and yet again,proved his merit by scoring the 5goals in the tournament for the state including the crucial goal against Manipur – again from a mesmerizing free-kick.

Shakir’s ascent to the sky of the game is only a matter of time. Given good training anddue opportunities to exhibit his talent, Shakir has another Kakroo, Ishfaq or Wadoo in the making. Notwithstanding his talentthe country he lives in, he may never attain the level of Pogba, but in Razaey Kadal, he has already become the Pied Pier of Hamelin!

Views expressed are author’s personal. Can be contacted at [email protected]>