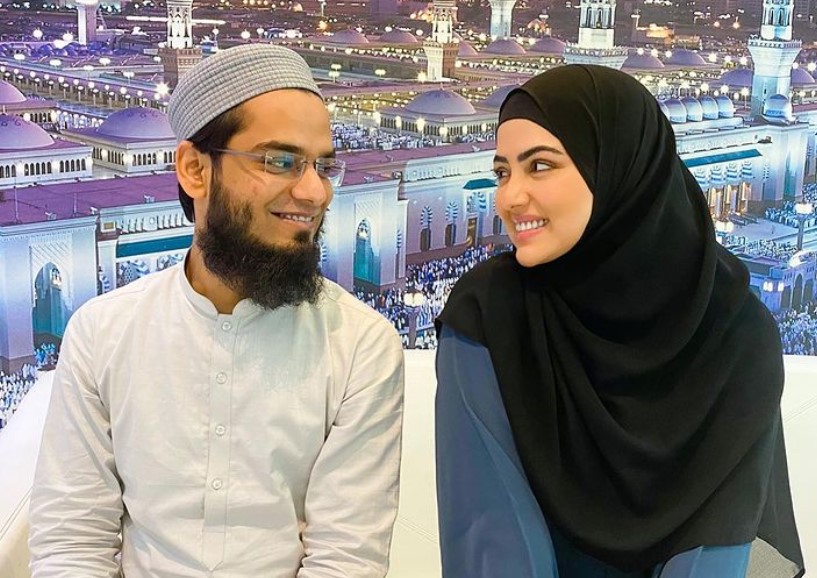 Sana took to social media to share pictures of her life partner. The former actress also penned a love-filled note for her partner.

“I pray for your Deen and Akhirah and everything in between just like I pray for mine. I pray for you just like I’m praying for myself, because what I want for myself I want for you You lead me closer to Allah & not the sin you were worth the wait Shaadi ki pehli salgira khoob mubarak ho @anas_saiyad20 Can’t wait for the photo background to turn into real one for us soon  In Sha Allah…#sanakhan #anassaiyad #alhamdulillah #blessed #unitedforevertilljannah #inshaallah,” Sana wrote.

Unlike conventional makeup, Halal makeup adheres to Islamic standards i.e. they are free from pig-derived and other forbidden ingredients. They are also wudu–friendly (permeable to water) as required by Islamic standards. Halal beauty products can range from eye shadows, foundations, nail polishes, and even fragrances.

As per ISWA Halal Certification Department, halal makeup must be free from alcohol, najs ingredients (filthy and unclean), forbidden animals in Islam, or animals that have not been slaughtered as per Sharia law. According to its director Habib Ghanim, the slaughter of an animal is considered Halal when it is done in the name of Allah, followed by the recital of prayer (Kalma). The animal must be killed with bare hands or a specific method of cutting.

“Your skin is the biggest organ in your body. It absorbs everything, so you’re consuming [ingredients] indirectly,” says Habib Ghanim. Although Halal makeup is not new in the world of cosmetics, it has gained prominence among the Muslim community who comprise 23% of the world’s population. Reportedly, more and more Muslims are now searching for Halal alternatives to commonly used makeup and other beauty products.

However, the mere use of Halal ingredients is not sufficient to receive a Halal certification. A makeup brand needs to meet lengthy requirements at every stage of production and distribution for it to be certified as Halal. It may take up to 2 years for a brand to receive such a certification. In the United States, Amara Cosmetics for instance have been producing halal makeup products. The largest certification organization in the country is the U.S. Halal Certification.

According to Habib Ghanim, all products are tested in associate labs to check for traces of pork or its byproducts before certification. The certification costs around $2000, depending on the number of products that are certified. To be able to use the trademark, logo, and copyright of the US Halal Certification, a brand needs to pay for it extra. The certification agency also requires brands to notify if product ingredients are changed. It also undertakes an independent audit of products sold by halal-certified companies.

She said that non-Muslims too could also use the same halal-certified products as they are less harmful and ‘cruelty-free.’ According to Imam Latif of Honest Chops, halal is a lifestyle that is not limited to meat or food. Reportedly, he oversees not only the butcher’s adhering to Islamic traditions during slaughter but also the humanitarian ethics behind it. He highlighted the environment-friendliness of Halal products by sourcing the animals from the right place, selling every edible part of the animal, and eliminating wastage. “The preservation of life is one of the primary objectives of Islamic law,” remarked Latif.

He regretted that Muslims at times buy vegan alternatives to conventional cosmetics due to a lack of Faith in halal-certified products. “There are a lot of Muslims who become vegan, vegetarian, or adopt a kosher lifestyle because they are frustrated with halal products on the market…There isn’t a national certification system that is so recognized that if you don’t have it, you’re not given credence,” Latif added. However, both Ghanim and Latif are convinced that Muslim consumers will continue to buy halal products, and the industry, which is worth billions of dollars, will witness a boom.