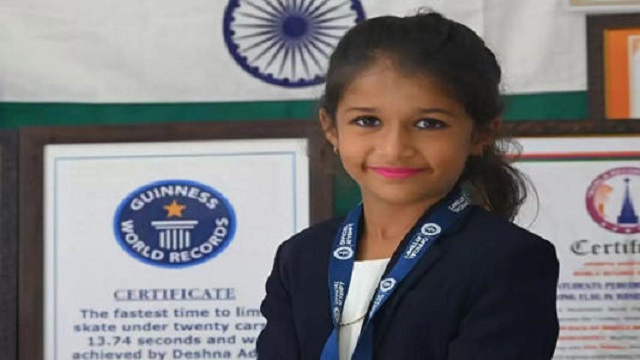 A seven-year-old girl from Pune has set a new Guinness Book of World Records for skating under 20 cars simultaneously in over 13 seconds.

Deshna skated underneath the 20 cars in a world-record-breaking performance on April 16 in Pune, covering the 193-foot distance in 13:74 seconds.

Media reports said Deshna has been learning to skate for the last two years. Over the previous six months, she had been preparing for this record in limbo skating.

Deshna’s father said that he built a practice track for his daughter because there wasn’t enough room for her practice sessions.

The family received a formal certificate from the Guinness Book of Records team.
Deshna has taken part in many competitions across the country, taking home around 40 medals and roughly 16 certificates in several skating competitions so far.