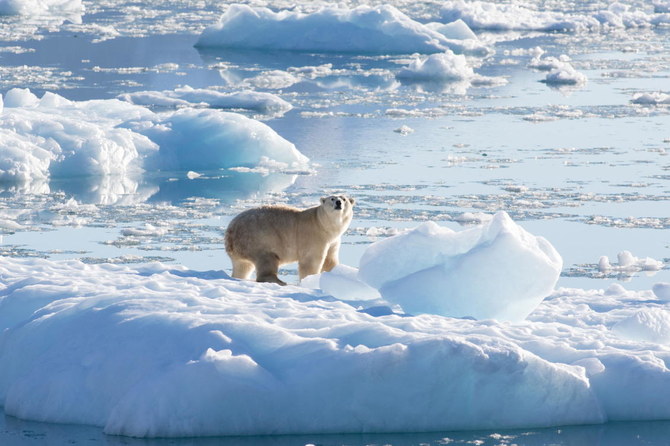 WASHINGTON: Scientists have identified an isolated subpopulation of polar bears in Southeast Greenland.

In their findings, scientists said instead make use of freshwater ice pouring into the ocean from the region’s glaciers, suggesting this particular habitat is less susceptible than others to climate change.

Their findings, described in the journal Science on Thursday, open up the tantalizing possibility that at least some pockets of the species might be able to survive further into this century when Arctic sea ice is expected to disappear completely during the summer months.

“One of the big questions is where in the Arctic will polar bears be able to hang on, what we call ‘persist,’” first author Kristin Laidre, a polar scientist at the University of Washington and Greenland Institute of Natural Resources told a news agency.

“I think that bears in a place like this can teach us a lot about where those places might be.”
Laidre and colleagues first spent two years interviewing Inuit subsistence hunters who provided input and ecological knowledge, including harvest samples for analysis.

They then began their fieldwork, which lasted from 2015 to 2021, in a harsh region that was long understudied because of its unpredictable weather, heavy snowfall, and jagged mountains.

Each year, the team would spend one month in springtime, staying in the nearest settlement Kuummiit, which is a two-hour helicopter ride from where the bears live. Fuel depots had to be staged along the route in advance down the coastline, creating a hopscotch-like commute to work.
The team tagged the bears with satellite tracking devices and collected genetic samples by either capturing bears or firing biopsy darts into their rumps.

Thought to number a few hundred individuals, “they are the most genetically isolated population of polar bears anywhere on the planet,” said co-author Beth Shapiro, a geneticist at the University of California, Santa Cruz and investigator at the Howard Hughes Medical Institute, in a statement.
“We know that this population has been living separately from other polar bear populations for at least several hundred years.”

Unlike their cousins, the Southeast Greenland polar bears were found to be homebodies, seldom straying far to hunt.

Their isolation arises from the geography: they live in a complex landscape of fjords on the very edge of their range on the southern tip of Greenland, well below the Arctic circle, with nowhere to go.

To the west, there are an enormous set of mountains and the Greenland Ice Sheet, and to the east the open water of the Denmark Strait to Iceland. They also have to contend with a rapid current that flows southward along the coast.

While sea ice provides hunting platforms for most of the Arctic’s roughly 26,000 polar bears, the Southeast Greenland bears have access to sea ice for only four months, between February and late May. For the remaining eight months they rely on chunks of freshwater ice breaking off the Greenland Ice Sheet in the form of marine-terminating glaciers.