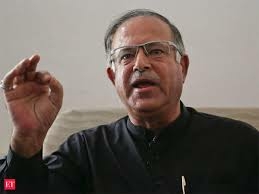 Srinagar: As demand for restoration of statehood to J&K gets shriller–with Abdullahs and other politicians speaking in its favour in the last few days — Senior Congress leader Tariq Hamid Karra on Monday said that this “parroting by some political leaders for restoration of Statehood is a precursor to the already taken decision by ‘chosen’ few.”

Karra while taking to his Twitter handle wrote: “A highly connected friend of mine told me that the sudden outbursts and parotting by some political leaders from Jammu and Kashmir for the restoration of Statehood is a precursor to the already taken decision by chosen few in GOI for which the timeline is 15th of August 2020 for initiating the process for restoration of Statehood and 5th August for restoring 4G. It is actually a rat race for taking the credit (sic).”

“As for statehood to the Union territory of Jammu and Kashmir, it will happen at the right time,” Avinash Rai Khanna told news agency Kashmir In-depth News Service over phone from New Delhi.

“The government has promised statehood to the J&K UT. I assure you that the government will fulfil its promise at the appropriate time,” he said.

He said that the “rights of local people will be preserved in the region.”

In his article published in The Indian Express on Monday, Omar Abdullah said he would not contest elections till J&K remains a Union Territory.

Expressing his opinion for the first time since August 5 last year, the National Conference vice president, who was detained for months following the abrogation of Article 370, wrote:  “I am very clear that while J&K remains a Union Territory I will not be contesting any Assembly elections. Having been a member of the most empowered Assembly in the land and that, too, as the leader of that Assembly for six years, I simply cannot and will not be a member of a House that has been disempowered the way ours has.”

Omar said he failed to understand why J&K was downgraded to a Union Territory “except to punish and humiliate the people of the state”.

To mention, Union Home Minister Amit Shah had told the Parliament on August 5 that statehood would be restored “once the situation improves”.

Sources, meanwhile, say that BJP is learnt to have asked the local leadership to raise the pitch for return of full-state status.

Interestingly, senior BJP leader from J&K and former MLC Sofi Yusuf has said that they would protest after August 5 for restoration of statehood to Jammu and Kashmir.

National Conference patron and former chief minister Farooq Abdullah on Sunday called for restoration of its statehood and hoped the Supreme Court would render justice by striking down the repeal of Article 370 provisions.