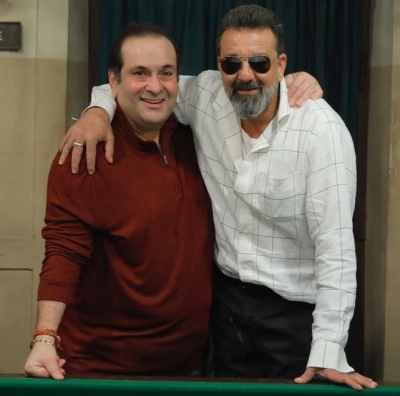 Mumbai: ‘Toolsidas Junior’, the sports drama set in 1994, brings together the late Rajiv Kapoor and Sanjay Dutt.
While the film remains special for many reasons, the biggest for the entire team including Sanjay Dutt remains that ‘Toolsidas Junior’ was Rajiv Kapoor’s last film.
With ‘Toolsidas Junior’ Ashutosh Gowariker and producer Bhushan Kumar join hands to bring audiences a sports entertainer with a heart. Exploring the sport of snooker for the very first time in the Indian film landscape, the makers also managed to pull off a casting coup!
Speaking on the film, producer Gowariker says “Both Rajiv and Sanjay have an iconic lineage – with legendary stars of the ’50s and ’60s as parents. However, both were never cast together in their initial films. This script allowed us to bring them together and thankfully, both consented.”
Further, Mridul who is the writer and director of ‘Toolsidas Junior’ says: “In my growing up years, my dad showed me many of Shri Raj Kapoor and Sunil Dutt saab’s films. It’s surreal to have both of their juniors in my first film.”
Depicting the motivational story of a young boy driven by passion for the game of snooker and his emotional and affectionate relationship with his father, ‘Toolsidas Junior’ offers the ideal collective family viewing experience on Netflix, catering to all audiences.
Marking the last film of the late Rajiv Kapoor, ‘Toolsidas Junior’ stars Varun Buddhadev and Sanjay Dutt in leading roles.
The sports drama set in Calcutta in 1994, journeys through the life of a snooker champion played by Kapoor, who loses his heart after losing an important match. His son, played by Buddhadev, takes it upon himself to bring his father’s name back to the winner’s list.
Gulshan Kumar and T-Series present Ashutosh Gowariker Productions’ ‘Toolsidas Junior’. Produced by Bhushan Kumar, Krishan Kumar, Ashutosh Gowariker and Sunita Gowariker, the film written and directed by Mridul starts streaming on Netflix on April 19.