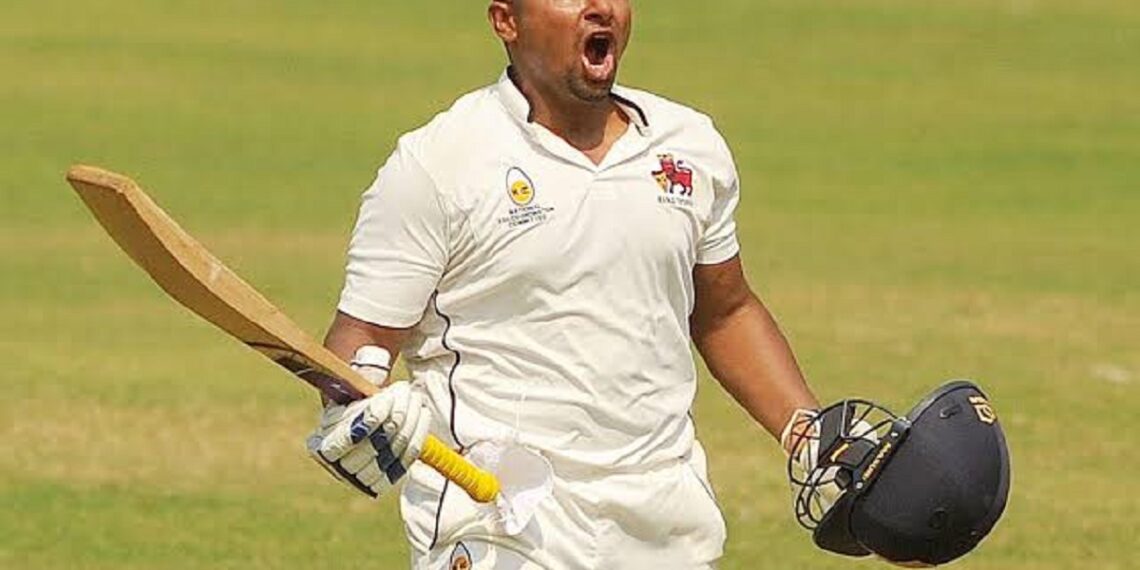 Mumbai batter Sarfaraz Khan has been piling up runs in the domestic scene for a while. His latest heroics, a 92-ball 100 hundred, came for Rest of India on Day 1 of the Irani Cup match against Saurashtra in Rajkot on Saturday.

He reached the landmark with a boundary. Sarfaraz’s first-class average is currently over 82.

Sarfaraz ended up among the top run-scorers in Ranji Trophy 2019-20. Across six matches in nine innings, Sarfaraz scored 928 runs at an average of 154.66. Three centuries and two half-centuries were scored by the batter, with the best individual score of 301*.

Another blockbuster Ranji season followed for Sarfaraz in 2021-22. He ended this season as the top-scorer in the competition with 982 runs at an average of 122.75. Sarfaraz scored four centuries and two half-centuries. His best individual score was 275. This included a century in the final, which Mumbai lost to Madhya Pradesh.

His purple patch continued in Duleep Trophy 2022, where he scored a match-winning 127* in the final for the West Zone and 34 runs in the second innings.

Samiullah Beigh, former Indian first-class cricketer who played for Jammu and Kashmir from 2002 to 2017, has shared an interesting and inspiring anecdote about Sarfaraz Khan’s determination to become the batsman he is today in the domestic circuit.

In a Facebook post, Samiullah shared how he saw Sarfaraz practicing in Srinagar’s Sonwar stadium on the day of Eid some 8 to 9 years ago. Here is what he wrote in the post:

“For all youngsters let me share a story: 8-9 years ago, I went to practice at JKCA Sonwar stadium as usual and incidentally it was an Eid day. No one was around and while I was waiting for someone else to turn up, I started to lap around the B ground, I saw a young kid (9-10yr old) bowling left-arm spin to an older boy( 15-16 yrs old) on cement wicket and an elderly male doing the fielding.

Since it was Eid and no one else was around, I went up to them to have a chat, and was fascinated to learn that Sarfaraz Khan (the boy batting) and his family had arrived in Kashmir on holiday and his father who happened to be his coach too, had asked Sarfaraz not to miss practice even during holidays. They used to go for site seeing in the morning and turned up for practice every afternoon.

P.S: You don’t create history by routine work! U need to work harder than others to get separated from crowd. Very happy to see this kid on d verge of realising his father’s dream.