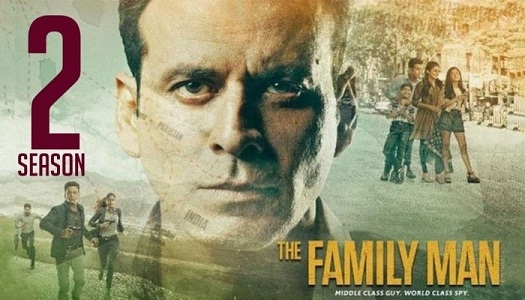 A riveting experience of nine episodes which could have been reduced to 7-6 episodes, with a shining performance by both the leads Manoj Bajpai as Srikant, Samantha as Raji but no answer to ‘Lonavla mai kya hua tha’?

In FM2 you will identify Samantha as Hero and Manoj Baipai as Villain or the other way around thanks to its  writing and character building on screen.

The rousing thrill of Season 2 starts with episode 3, the first two episodes are tedious, overstretched and may appear unnecessary and  boring for some. Excitement starts from Episode 3, so patience.

Srikanth Tiwari  is on the mission to stop an anticipated terrorist attack in Chennai while  Raji, a guerilla rebel is toiling hard for her cause i.e cause of liberating her nation planning to execute a terrorist attack on Indian PM.

‘They are Soldiers, They are terrorists’, dialogue is the theme of the series made in the backdrop of Srilanka Tamil Nadu political conflict and certainly a statement from makers Raj and DK towards protesting Tamilians who are against screening of Family Man 2.

Another fascinating feature of this series is its bilingual character language, while Manoj Bajpai speaks Hindi, Samantha as a proud nationalist is speaking Srilankan Tamil and this bilingual interaction between characters adds authenticity and reliability for the audience.

South Indians characters are communicating in Tamil, Characters from Mumbai are speaking Tamil just like normal.

Shrikanth Family and personal life is more flawed than Season 1, his new to do Corporate job is as bad as his personal relationship with wife and children. But as they say ‘every saint has a past’, his past life as Secret agent haunts him just like his new corporate job of 9 to 5. In the midst of this crisis he goes back as Secret Agent Srikanth Tiwar and does what he does.

Family Man as the name suggests is about family too and in Season 2 Srikanth’s issues with his wife are in a jinx. By the way We still don’t know Lonavala mai kya hua tha? Let’s hope  Season 3 will clear it.

The relatability of characters like Samantha as Raji the women rebel fighter battling sexism, harassment, in her quest for liberating her Nation while as Srikanth’s daughter played by Ashlesha Thakur as Dhriti Tiwari is going through adolescent challenges and ultimately falling for the wrong guy.

And yes it is funny and humorous. Conversations between best buddies Manoj Bajpai and JK Talpade played by Sharib Hashmi are funny treats to watch and adding spice to scenes are nerve wracking scenes with cinematic brilliance of camera continuous scenes. Continuous  camera shots particularly for action and gun flight are gripping and add in bringing more realism to the screen. While watching continuous shots I was reminded of movies like 1917 and Revenant. Inspiration after all.

Series has a lot of messages to propagate, dialogues like ‘South India has 5 states’, attempts to aware and break the popular stereotype people have towards South India i.e identifying only the state of Chennai as  South India.

Similarly, the public bus harassment scene faced by Raji is a heart wrenching ordeal  for the audience.

Sadly public bus harassment is never ending in our part of world.

A stellar performance by director Raj and DK, a stellar camera work and of course a stellar cast, FM Season 2 will not disappoint. It is a big YES to watch and Family Man Season 3 focusing on the China-North East is coming.

(Badrul-Duja can be mailed at [email protected])