Resurfacing of Islamist parties is meant to stop Nawaz 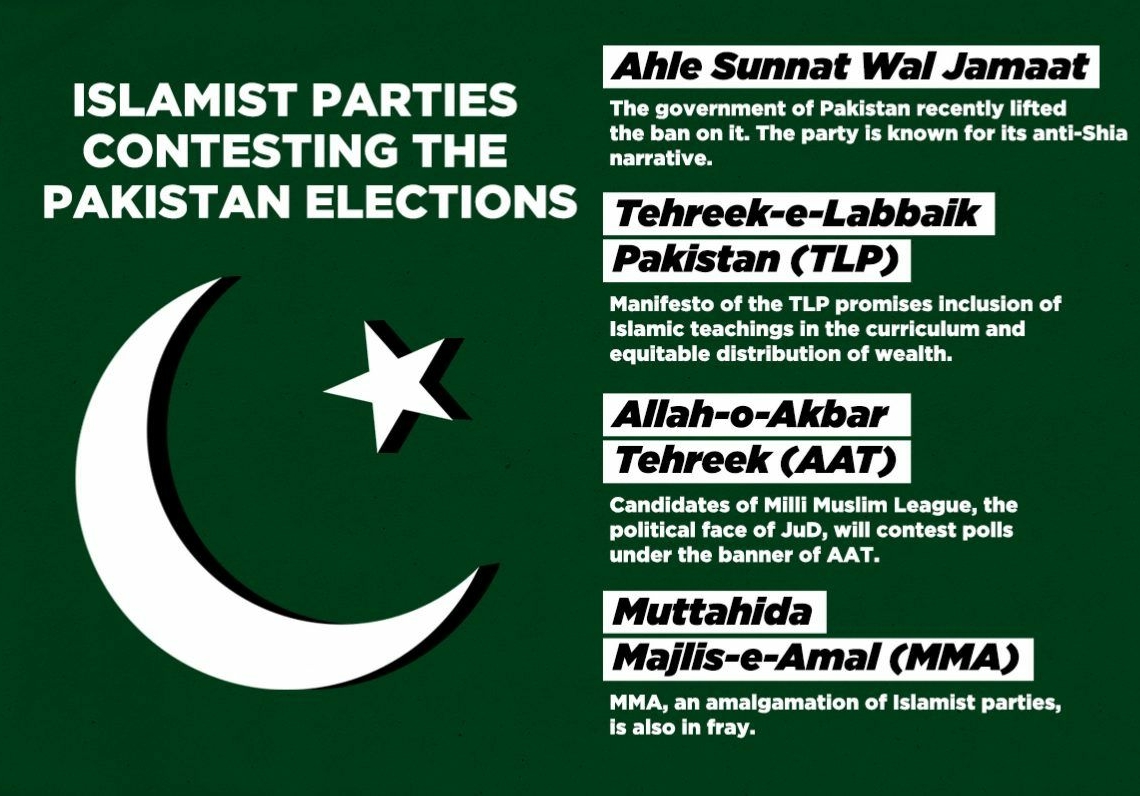 The extensive participation by religious parties in this election will only make things difficult for Pakistan in the longer run.
Just when Shamshad Akhtar, caretaker Pakistani minister for finance, was presenting a 26-point ambitious plan to curb the financing of terrorist groups at the Financial Action Task Force (FATF) meeting last month, the government lifted the freeze on the assets of Muhammad Ahmed Ludhianvi, chief of the AhleSunnatWalJamaat (ASWJ). The government also lifted the ban on his party.
Earlier, Ludhianvi was enlisted in the Fourth Schedule, a section of the Anti-Terrorism Act (ATA), under which he was kept under observation and allowed limited movement.
Known for a sectarian tilt, the ASWJ has a history of spreading anti-Shia narrative over the years and has been involved in targeting high-profile Shia scholars. While the group struggled to maintain its sectarian identity after enactment of National Action Plan (NAP), it kept working under the guise of different names.
Since the NAP doesn’t bar anybody from contesting elections, Ludhianvi’s group keeps organising campaigns, seminars, corner meetings and is openly stitching religiopolitical alliances with like-minded outfits.
The general elections in Pakistan are only weeks away, and the leeway to Ludhianvi is noteworthy. Many believe that the resurfacing of people like Ludhianvi is aimed at checking the possible return to power of Nawaz Sharif’s Pakistan Muslim League (PML-N).
In 2015, a wheelchair-bound cleric MaulanaKhadim Hussain Rizvi formed the Tehreek-e-Labbaik Pakistan (TLP). In September last year, 52-year-old Rizvi, who was a marginal figure till then, threw his weight behind Independent candidate Azhar Husain Rizvi in the bypoll for NA-120, a parliamentary seat that fell vacant after disqualification of Sharif. The election results surprised pundits because the Independent candidate edged past the Pakistan Peoples Party (PPP) candidate.
Rizvi’s party further rose to prominence in November last year when it kicked off a long march from Lahore to Islamabad against a change in the blasphemy law. At the end of the 22-day protest, the law was restored to its original form and law minister Zahid Hamid resigned.
The unconditional submission of the state to his demands and his firebrand style of oratory made Rizvi and the TLP recognisable names across Pakistan. In the upcoming polls, the TLP’s manifesto promises equitable distribution of wealth and inclusion of Islamic teachings in the curriculum.
The Milli Muslim League (MML), which is the political face of Hafiz Saeed’s Jamaat-ud-Dawa (JuD), is also gearing up for elections. Despite repeated attempts, the MML failed to get itself registered with the Election Commission of Pakistan (ECP). The US Department of State in April this year included the MML in the list of terrorist organisations.
Now, in a recent move, the MML candidates will contest the polls under the banner of Allah-o-Akbar Tehreek (AAT), a little-known party registered with the election commission. The MML spokesperson recently said that talks are on with the Pakistan Muslim League-Quaid (PML-Q), the Pakistan Muslim League-Functional (PML-F), among others, for seat-sharing.
An amalgamation of Islamist parties had emerged in 2002 under the name of MuttahidaMajlis-e-Amal (MMA). The group, however, disintegrated by 2007. The JamiatUlema-e Islam (JUI-F) and the Jamaat-e-Islami (JI), which were part of the MMA, contested the
Last year, the MMA was once again revived, and the JUI-F and the JI are now contesting the upcoming elections together under one symbol, that of a book.
Islamists have never formed a government in Pakistan, and chances of their doing so this time are bleak. But, the mainstreaming of banned outfits under the nose of the establishment speaks volumes about the state’s lack of seriousness in fighting terrorism even when faced with the prospect of diplomatic isolation and black-listing under the FATF.
Pakistan has a large young population, and if even a fraction of them are influenced or radicalised by these organisations, the country may find itself in a dangerous situation.
The extensive participation by religious parties in this election will only make things difficult for Pakistan in the longer run.