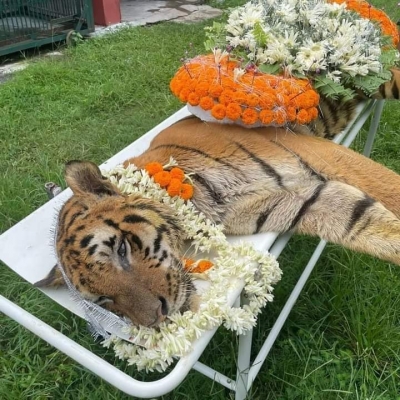 Kolkata: Raja, one of the oldest tigers of India, died at Khairibari Tiger & Leopard Rescue Centre at Jaldapara in West Bengal’s Alipurduar district on Monday.

The big cat was 25 years and 10 months old, according to Jaldapara’s Divisional Forest Officer, M. Deepak.

He said that the tiger was brought to the rescue center in August 2008 after he got injured by a crocodile attack at Sunderbans, the abode of mangrove forestation, and Royal Bengal tigers in the South 24 Parganas district. “Since then, it had been here and became a part of the rescue hub family,” he said.

Deepak said that Raja was suffering from old-age-related ailments for the last few months and died early on Monday following multi-organ failure. The big cat weighed around 140 kg at the time of death.

“I am really very sad today. As per rules, a first post-mortem was conducted and after that, the body was cremated,” Meena informed newspersons.

It is learnt that an initiative has been mooted to construct a memorial within Khairibari Tiger & Leopard Rescue Centre in memory of Raja.

Meanwhile, Deepak said that the staff and officials of Khairibari Tiger & Leopard Rescue Centre were planning to celebrate the 26th birth anniversary of Raja on August 23. “However, he did not give us that chance,” he rued.