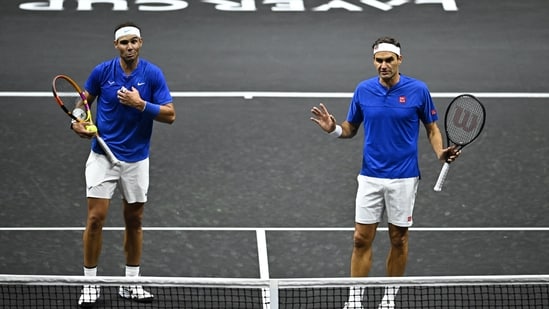 Moments after Roger Federer played his last and final tennis match of his career on the early hours of Saturday in London, in a doubles match alongside Rafael Nadal at the 2022 Laver Cup, the Swiss tennis legend withdrew from the tournament. Matteo Berrettini has replaced him for the singles tie for Day 2’s line-up in Laver Cup. Later, Nadal followed his “friend and greatest rival” in withdrawing from the event as well.

Nadal had arrived in London on Thursday, a day before his match alongside Federer, owing to “tough personal situation”. He went straight to meet his teammates where the doubles match was confirmed before going for the gala dinner. Nadal barely had practice time. In the match, the pair lost 4-6 7-5(2) [11-9] to the Team World combination of Jack Sock and Frances Tiafoe in what was Federer’s final match of his illustrious career.

Moments after the match, Nadal withdrew from the singles tie on Saturday. Cameron Norrie has replaced him in the line-up as he will take on Team World’s highest-ranked player Taylor Fritz.

The Laver Cup confirmed on Saturday morning: “Matteo Berrettini will be stepping in for Roger Federer: ‘I cannot wait to start.’ Additionally, Rafael Nadal withdrew for personal reasons. He will be replaced by Cameron Norrie.”

“I am not doing well. It’s been a tough time for me, I hardly slept, I was stressful. Luckily everything is okay and I was able to get here,” said Nadal in the post-match presser explaining the reason behind his withdrawal.

Both Berrettini and Norrie will be in action in the first session on Day 2 while Novak Djokovic will kick off the second session with his singles tie against Tiafoe. Djokovic will then combine with the Italian for doubles as well.