Pulwama like incidents whip up Azadi sentiment among people: Farooq 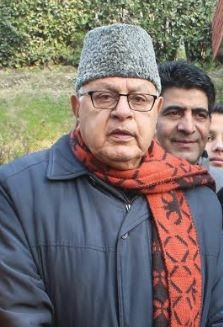 Srinagar, Dec 19: National Conference (NC) president, Dr Farooq Abdullah on Wednesday said that incidents like Pulwama where seven civilians were killed should be avoided as they whip up Azaadi sentiments among people.
He asked forces and New Delhi to ensure that the Pulwama like incidents are not repeated.
The Member of Parliament also pitched for early assembly elections in Jammu and Kashmir, terming the Governor’s rule as ‘autocratic and dictatorial rule’.
Soon after the top PDP leaders joined NC in presence of the party president and vice president Omar Abdullah, Dr Farooq while talking to reporters on the sidelines of the function said that the forces in Pulwama should have used water cannons and tear smoke shells so that the loss of lives could have been avoided.
“We hope New Delhi, forces and police will ensure that Pulwama like incidents are not repeated in future,” he said, adding that “anybody being killed can’t be brought back but Pulwama like incidents make a blot in our hearts and whips up the Azadi passion among the people.”
While welcoming the PDP leaders including former VC Wakf Board Peer Muhammad Hussain and former minister Syed Basharat Bukhari, Dr Farooq said that the good steps are always welcomed. “Anyone can join NC and for that the party has a committee which handles such things,” he said.
Pitching for early assembly elections in the State, Dr Farooq said. “There should be elections in Jammu and Kashmir and the Governor’s and the President’s rule must come to an end and people will choose their representatives.”
On the grand alliance for 2019 Lok Sabha elections, Abdullah said alliance was working and the states will hold a key in alliance formations in the elections. “Alliances will be mostly in the states and those states will produce the results for the parliament. And that will make the difference. Some places there will be stronger alliance and some place there will be mix alliances but the states will be important factor,” he said.
Asked about bills passed during Governor’s rule in the State, Dr Farooq said that that the Governor’s rule is an autocratic and dictatorial rule and “we hope Governor doesn’t take any such step that pushes back democratic process.”