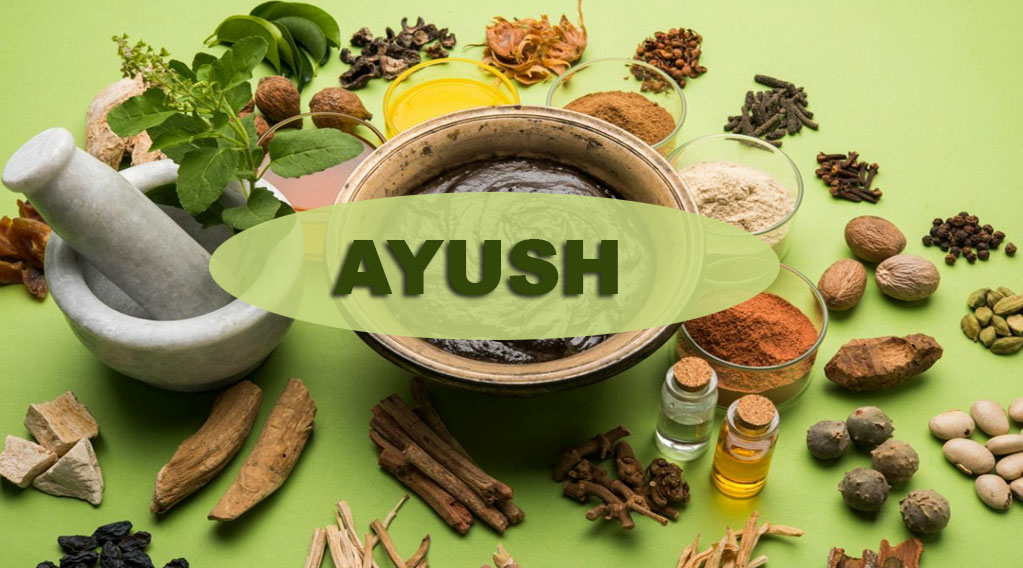 Indian systems of medicine are millennia old and offer overall wellness. Changes in health paradigm has led to an unprecedented resurgence of interest in Ayush systems (namely Ayurveda, Yoga, Naturopathy, Unani, Siddha, Sowa-Rigpa and Homoeopathy) over the years. State patronage and encouragement to the pluralistic approach in health care have accelerated the progress of Ayush towards providing quality healthcare to all. While preserving its core strengths, Ayush with transdisciplinary and translational approaches is unravelling clinical evidencesbest endorsed by centuries of healing people. Established in 2014, the Ministry of Ayush has amplified the role of Ayush in realizing the ‘New India’ vision of Hon’ble Prime Minister. It has undertaken various initiatives to develop education, research, and propagation of the Ayush systems of healthcare.

Prestigious international collaboration in important fields like Pharmacopoeia are indicative of the galloping acceptance of Indian traditional health systems and are sure to impact the Ayush sectors in ways more than one. This is demonstrated by the MoU signed recently between PCIMH & American Herbal Pharmacopoeia (AHP) and is expected to impact the prospects of Ayurvedic medicines’ scope in the USA in future as currently, ayurvedic products are treated as Food Supplements and not as Drugs in the USA.

One of these key initiatives includes Ayush’s role in the fight against COVID-19. The Ministry of Ayush has undertaken several Research & Development (R&D) and public healthcare initiatives to harness the potential of Ayush systems in mitigating the impact of the pandemic.  The government has issued various guidelines, advisories & launched campaigns such as ‘Ayush for Immunity’ to promote awareness regarding measures to improve immunity and advising simple home remedies easily accessible to the general public. Ayush institutions like All India Institute of Ayurveda (AIIA), New Delhi were made dedicated COVID Health Centre for management of COVID- 19 mild to moderate cases as per the AYUSH guidelines. The Ministry collaborated with several organizations to encourage, promote and advance evidence-based research on Ayush. The Ministry constituted an inter-disciplinary Ayush R&D Task Force consisting of scientists, pulmonologists, epidemiologists, pharmacologists etc., from premier organizations including ICMR, DBT, CSIR, AIIMS and released “National Clinical Management Protocol based on Ayurveda and Yoga for management of COVID-19”.

Over 127 research studies in COVID-19 were initiated at 152 centers across the country. Out of these, a total of 90 studies have been completed, and 15 manuscripts have been published, while 20 preprints have also been published. These studies have shown very promising outcomes in reducing the incidence of COVID among Ayush prophylactic care users. The well-designed clinical studies on Ayush interventions like AYUSH 64 as standalone or adjunct to standard of care in asymptomatic and mild to moderate COVID-19 patients demonstrated early clinical recovery, early negative RT-PCR results, reduction in the duration of hospital stay, prevention in further progress to severe stage and complications, and improvement in quality of life. The Ministry launched a massive nationwide campaign for distribution of proven poly herbals AYUSH-64 and KabasuraKudineer for the benefit of the vast majority of out of hospital COVID patients. The ‘Ayuraksha kit’ containing ‘Kadha’ concoction (herbal tea), ‘Sanshmani’ tablet (made from Giloy) and Anu Taila for nasal application given to 80,000 Delhi Police frontline personnel for boosting immunity and increasing quality of life against COVID 19 showed just 48 percent of the force getting infected despite being vulnerable to the virus.

Further, Ayush Sanjivani mobile app developed by Ministry of Ayush has documented the impact assessment of effectiveness, acceptance and usage of Ayush advisories & measures in the prevention of COVID-19 in around 1.5 crores respondents highlighted that a good proportion of the representative population has utilized Ayush measures across different regions of the country. 85.1% of the respondents reported use of Ayush measures for prevention of COVID-19, among which 89.8% respondents agreed to have benefitted from the practice of Ayush advisory. The Ministry and World Health Organization have entered into the Technical Service agreement to undertake a study being executed in collaboration with Public Health Foundation of India (PHFI) for assessment of integration of Ayush into the Public Health System for combating COVID-19. A dedicated community support helpline number 14443 has also been operationalised by the Ministry to provide Ayush based approaches and solutions against COVID 19 to public.

The Ministry’s mobilization efforts during the pandemic have also resulted in a total of 8,32,445 Ayush practitioners, paramedic staff, and students enlisting themselves as COVID warriors on covidwarriors.gov.in. Out of these, 1,75,603 Ayush doctors were trained through iGOT (Integrated Government Online Training) in collaboration with the Ministry of Health and Family Welfare, Government of India. Further, a force of over 37,000 Ayush staff was deployed for COVID-19 related healthcare services.

An increase in the budget of Ayush, from ₹2122.08 crore to ₹2,970.30 crore (which marks an increase of 40% of the corresponding figure) has also solidified this idea with the Union Budget 2021-22, bringing out numerous enablers and catalysts which the Ayush sector can tap, and taken together, they place the sector on a sustainable path of growth.

Due to large-scale sensitization and steps taken by the Ministry of Ayush towards mitigation of Covid over the past two years, the footprint of the Ayush industry has also increased, with the AYUSH sector witnessing 44% growth.   Ministry of Ayush has promoted use of ready-made formulation like Ayush Kwath/ Ayush Kudineer /Ayush Joshanda endeavoring health promotion of public at large.

Some specific products have also seen tremendous growth with 500 to 700 percent increase in demand post the COVID-19 outbreak. This includes immunity-boosting products such as GuduchighanVati, Anu Taila, MahasudarshanGhanVati, Tulsi, while Chyavanprashproducts have seen 700 percent of growth and Ashwagandha exports increasing three times than the previous periods. These figures underline the wide recognition and public acceptance of Ayush systems among the masses.

Moreover, the income of farmers who cultivated medicinal plants has also increased during this period as suggested by the marketing report of the National Medicinal Plants Board (NMPB), Government of India, which indicates a 3-fold increase in the price of herbal raw materials in a short span of eight months.

It is also a matter of pride for all Indians that the World Health Organization has chosen India for establishing its Global Centre for Traditional Medicine. Director-General of World Health Organisation (WHO), Dr. Tedros Adhanom Ghebreyesus, gave a video message on the celebration of 5th Ayurveda Day on 13th November 2020 and praised the Prime Minister’s commitment to the universal coverage under Ayushman Bharat and evidence-based promotion of traditional medicines to achieve health-related objectives.

Our ancient practice of Yoga has achieved global domination as a lifestyle and wellness system in recent years, which has led to its recognition as a competitive sport on 27thNovember 2020 under National Yoga Sports Federation (NYSF), a Federation for Yogasana.

Yoga has recently become like any other mainstream degree but with better work potential owing to changing lifestyle and demands. One prominent indicator of this has been India’s first yoga university, Lakulish Yoga University, which was set up in 2013 and had witnessed a three-fold increase in number of admissions in 2018. As against 151 students in 2013, a total of 450 students, across all age groups had registered during 2018.

To propagate the practice of Yoga digitally, the Ministry of Ayush has also launched ‘Namaste Yoga app’ (a one-stop health solution that enables people to access Yoga-related information, Yoga events, and Yoga classes at their fingertips).

Reaffirming the faith of Hon’ble Prime Minister Shri Narendra Modi for AYUSH, the Union Cabinet recently also approved the continuation of the National Ayush Mission as a Centrally Sponsored Scheme for another five years till 2026 with a financial implication of Rs. 4,607.30 crore under which aims at supporting the States and UTs to improve the infrastructure for better AYUSH health care services at Primary level to achieve the National goal of Health and Wellness for all.