Prashant Bhushan fined one rupee, his lawyer hands him the coin 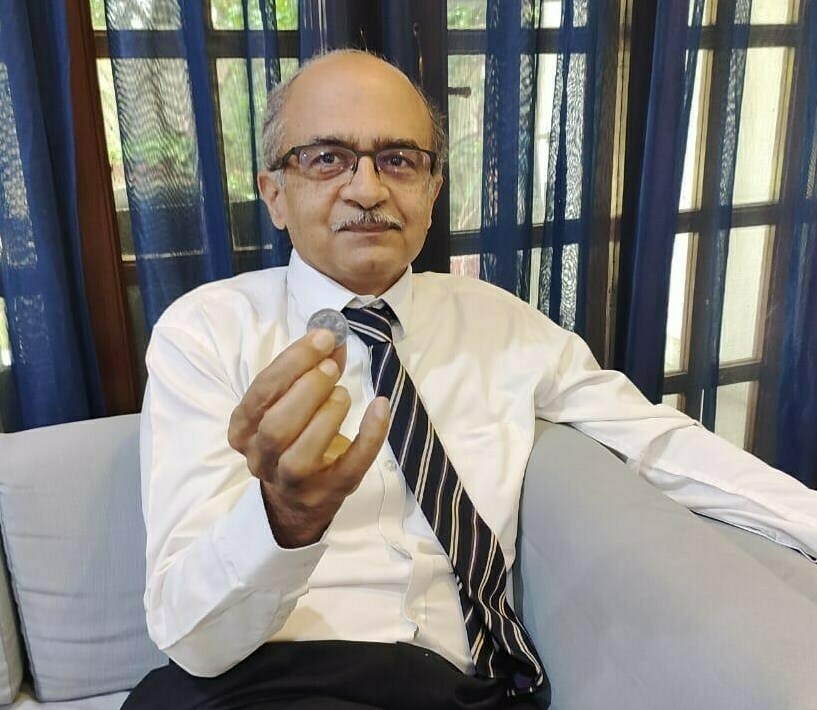 New Delhi:  The Supreme Court on Monday imposed a token fine of Re 1 on advocate Prashant Bhushan, convicted in a contempt case for tweets against the judiciary, which if he failed to deposit by September 15, the penalty will then be 3 months in jail and the senior advocate will be barred from practicing law for three years.

On August 25, a bench comprising Justices Arun Mishra, B.R. Gavai and Krishna Murari had reserved the order on the sentence, after Bhushan declined to apologize for his derogatory tweets against the judiciary.

Pronouncing the judgement, the bench said freedom of expression is there, but rights of others should also be respected, and the conduct of the contemnor also needs to be taken into consideration.

Later in a tweet, Bhushan shared him accepting a one rupee coin from his lawyer.

The bench observed that Bhushan gave wide publicity to the supplementary statement submitted in the court, where he refused to express regret for the tweets against the judiciary. The bench said this statement was released in advance to the press and it seemed to influence the independent judicial function.

The bench noted that the Attorney General had also initiated contempt against Bhushan, however, it was withdrawn after Bhushan expressed regret. Imposing fine, the bench said if Bhushan defaults then he will be barred from practice for three years, and would have to undergo imprisonment of three months.

During the arguments, the bench referring to Bhushan’s refusal to apologize for his tweets had said, “What is wrong in apologizing? Is this word so bad? During the hearing the bench also gave 30 minutes to Bhushan to think over his stand for not expressing regret in connection with the tweets.

Attorney General K.K. Venugopal submitted before the bench that his suggestion would be to close the matter without punishing Bhushan.

A contemnor can be punished with simple imprisonment of up to 6 months or with a fine of up to Rs 2,000 or with both. On August 14, the top court held Bhushan guilty of criminal contempt for his derogatory tweets against the judiciary.