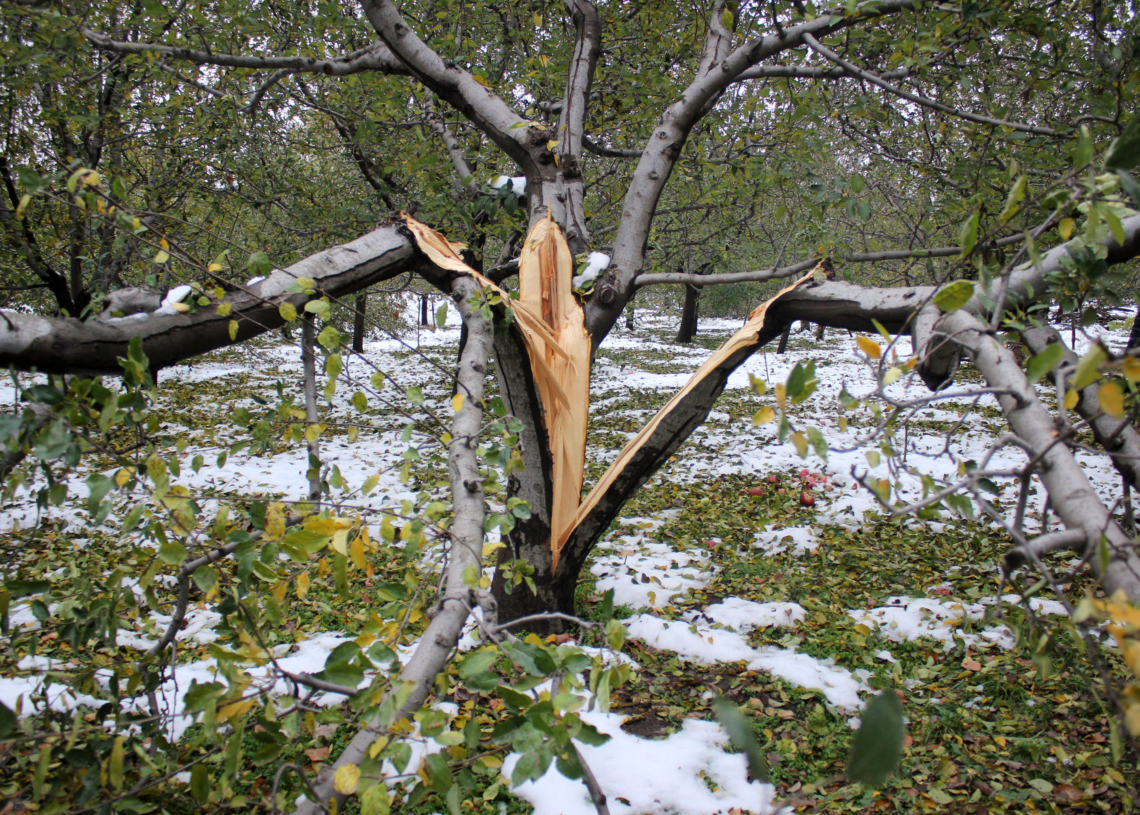 Srinagar, Nov 8: Five days after Kashmir received widespread snowfall, the people in parts of the valley say the administration is yet to restore basic amenities.
Kashmir was hit by snowfall on Saturday and Sunday, resulting in power breakdown.
Around 20 to 30 percent of the standing apple crop in orchards across the valley got damaged in the November snowfall happening after nine years.
However, many areas of Kashmir are still craving for basic facilities.
In south Kashmir’s Kokernag, the government has failed to restore the electricity.
“The electricity is yet to be restored in many parts of Kokernag. These areas have been reeling under darkness for the last six days,” Abdul Jabbar, a local said.
The MLA Kokenag, Abdul Rahim Rather, has expressed his concern over the delay caused in the restoration of electricity in his constituency.
He termed the assurances given by the government regarding the early restoration of electricity as “hollow and baseless”.
“People of my constituency have been suffering terribly due to the absence of electricity since the start of the recent bad weather and snowfall,” Rather said.
He further stressed upon the Governor administration to clear snow from Gowran to Madwa-Wadwan.
Shabir Ahmad, a resident of Kokernag, said the students preparing for different exams were not able to study in absence of the electricity. “We have been without electricity for the last many days. Many roads have not been cleared of the snow,” Shabir said.
Mohammad Usman, a resident of Langate, said they received electricity only for a few hours.
“The education of our children is suffering badly. We have to sit under candle light during evening hours,” he said.
State Congress chief G A Mir has urged upon the Governor administration to restore Lissar Power Grid Station due to snowfall. “It has left Kokernag, Veerinag and other adjoining areas without electricity,” Mir said.
Expressing serious concern over the problems confronting people in Veerinag, Kokernag and surrounding areas, Mir blamed that divisional administration for failing to make Lissar Grid Stations functional, saying that “few inches of snow have exposed the preparedness of the Govt”.
He urged upon the divisional administration to gear up, making Power Development Department accountable.
National Conference said that the assessment to ascertain the losses to farmers has not been commenced.
South Zone President Dr. Bahsir Ahmad Veeri said that the affected farmers have suffered immense losses due to the vagaries of weather.
“The marginalized farmers are at receiving end of all this. Most of the farmers had pinned their hopes on the annual produce to pay for their loans and other debts but the fury of nature left them wailing,” he said.
He said that electricity hasn’t been restored in many hamlets of the south Kashmir.
“The day-to-day working of the secondary and tertiary health care systems has been affected toting up the miseries of common people.”
Divisional Commissioner, Kashmir, Baseer Ahmad Khan said he would look into these issues.
“People shall also approach the concerned authorities related to grievances and addressing of any problems,” Khan added.

‘Farmers call for an immediate assessment of losses’

Srinagar, Nov 8: Expressing concern over the losses caused to horticulture by snowfall across Kashmir Valley, a group of farmers from Pulwama district Thursday demanded immediate compensation to the affected orchardists.
“Thousands of fruit and other trees are reported to have suffered massive damages due to latest snowfall, witnessed throughout Kashmir valley. There should be immediate assessment of losses suffered by the farmers on account of this snowfall,” they demanded.
The farmers said that that thousands of apple trees have either been broken or uprooted due to snow. “The government must depute an expert team to assess the losses especially in South Kashmir which has been the worst hit,” they said and demanded early relief to the affected orchardists and farmers.
They said the farmers have since long been demanding for implementation of crop insurance scheme in Kashmir Valley to benefit the farmers’ community in the event of such natural calamities. “When you have crop insurance for Jammu why can’t it be implemented in Kashmir Valley,” they questioned.