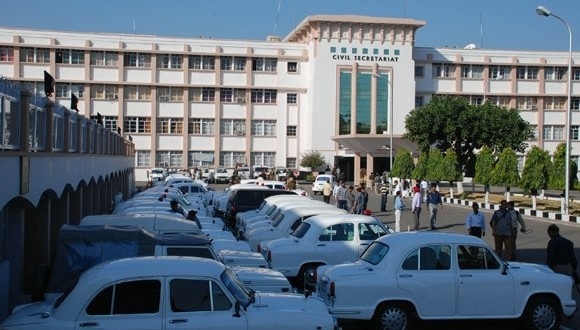 Srinagar, Apr 20: After submitting their resignations, the Bhartiya Janta Party (BJP) ministers have not been attending their offices at the Civil Secretariat Jammu.
Barring Deputy Chief Minister, Nirmal Singh, all the BJP ministers on Tuesday submitted their resignations before the state party president to pave way for a reshuffle.
However, the BJP ministers, except the Deputy Chief Minister, did not attend their offices at Civil Secretariat in Jammu on Wednesday and Thursday.
“I did not see any BJP minister on Thursday in Civil Secretariat and their office chambers were locked,” an official at the Civil Secretariat told The Kashmir Monitor over the phone.
The official said that in absence of ministers, the normal working was getting affected.
“Hundreds of people are visiting ministers’ offices with their grievances but remain unaddressed as ministers are not available here,” the official said.
Meanwhile, the BJP high command has summoned party ministers and other senior leaders from Jammu and Kashmir to New Delhi on April 23 to discuss a possible reshuffle in the cabinet.
“The BJP ministers resigned from J&K government to make way for new inductees. It is a reshuffle and nothing else,” a BJP leader said.
However, he said that BJP ministers could attend their offices as their resignations have not been accepted by Chief Minister and the Governor so far.
According to the sources in the BJP, the decision to seek resignations from the ministers was taken in a core group meeting, chaired by party Vice President Avinash Rai Khanna earlier this week.
They submitted their resignations days after two BJP ministers Chaudhary Lal Singh and Chander Parkash Ganga, accused of being part of the rally taken out in support of Kathua gang-rape and murder accused, resigned amid mounting pressure from opponents and protests.
While the two ministers claimed that they resigned on their own, sources revealed that the Prime Minister, Narendra Modi, didn’t accept their reasons for participation in the rally.
Modi also rejected the ministers’ defence that they had attended the rally organised by Hindu Ekta Manch to defuse the tension.
Modi also slammed the two BJP minister saying that being ministers in the J&K government, they shouldn’t have joined the attack on J&K police for arresting the accused in the gang rape of an eight-year-old minor.
Defending their move, the two ministers, however, maintained that they wanted to defuse the tension and maintain calm in the area.
Singh on Tuesday took part in another rally calling for a CBI probe into the case and demanded Mufti’s resignation for her “failure” to address the issue.
Saying that the CM failed to understand the popular sentiment, Singh said, “It is her biggest failure. If she has wisdom and conscience, she should resign.”