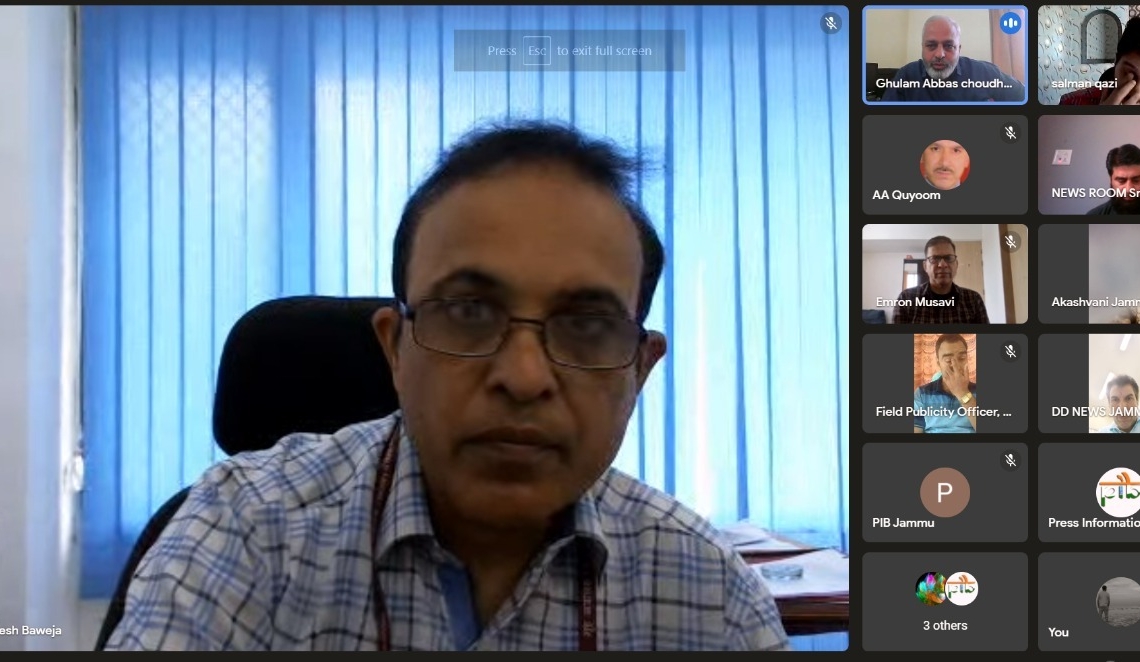 Srinagar: An online meeting of the Inter Media Publicity Coordination Committee (IMPCC), consisting of various units of the Ministry of Information and Broadcasting (MIB), was organised by Press Information Bureau (PIB) Srinagar on Wednesday.

Welcoming the participants, Baweja said that different media units under MIB have been regularly disseminating information about the ongoing COVID-19 vaccination drive, vaccine hesitancy and various other aspects of COVID-19 appropriate behaviour.

Addressing the participants, Ghulam Abbas highlighted the importance of coordination between various media units and added that inputs shared amongst all the units will help in disseminating vital information among people. He emphasised the need for renewed joint efforts to eradicate doubts among masses with respect to COVID vaccination.

Deputy Director News, Doordarshan Kendra Srinagar Salman Qazi presented an overview of the initiatives undertaken by the Kendra with regard to programmes and bulletins related to Covid and other topics. He added that DDK has undertaken proper coverage of the recent public outreach initiative of the Union government for Jammu and Kashmir.

Ramesh Chandra, Deputy Director DD and RNU AIR Leh, said that the media units have been successfully relaying awareness campaigns in remote areas of the region. He said that because of such efforts, there is no vaccine hesitancy in the region and Ladakh has recently achieved 100 percent vaccination of first dose.

Programme Head, All India Radio (AIR) Jammu, Renu Raina spoke about multitude of programmes related to Covid vaccination and precautions. She added that the department has been active in holding interviews with health experts on regular basis to clear any misconceptions regarding the vaccination drive and vaccine hesitancy. She said that such programs are being aired in all the local dialects to maximise reach.

Satish Vimal, Programme Executive (Coordination) AIR Srinagar said that the station has been regularly broadcasting up to date information about the Covid scenario in the form of daily updates and other awareness initiatives. He added that educational programmes for students, produced in collaboration with the Education Department, are also being broadcast regularly.

Ishfaq Shah, News Editor, Regional News Unit AIR Srinagar said that interviews of health officials and experts to clear doubts about Covid vaccination are being aired in different regional dialects. He also said that ample space is being provided to highlight programmes like Azadi Ka Amrit Mahotsav and various other people centric initiatives of the Central Government.

Media and Communication Officer, PIB Jammu Sheikh Mudasir said that the unit conducted awareness programmes on Covid vaccination and vaccine hesitancy and also roped in the services of doctors and other health experts to deal with the issue. He said that special impetus was given to conducting such activities in far flung areas and among tribal populations.

Shri Khurshid Yousuf, Field Publicity Officer Udhampur apprised the attendees about the various activities of the Regional Outreach Bureau (ROB). He said that ROB is actively using social media platforms like Twitter and Facebook to spread the message of Covid prevention among the masses. He said that besides organising online webinars, the unit has recently started conducting on-ground activities like awareness programmes and mask distribution drives also to address the issue.

Colonel Emron Musavi, PRO Defence Srinagar informed the meeting about the upcoming Air Show by the Indian Air Force to be held on September 26 at Dal Lake. He also thanked the various publicity units for their support and cooperation.

Earlier, Majid Pandit, Media and Communications Officer, PIB Srinagar briefed the participants about the initiatives undertaken by the Bureau with respect to Covid-19 awareness and other campaigns. He said that the department also carried out awareness initiatives on its social media platforms for wider reach. He emphasised upon the continuous synergy between various media departments in order to achieve the greater goal of efficient and effective message delivery to the masses.

Ghulam Abbas presented the vote of thanks in the end.