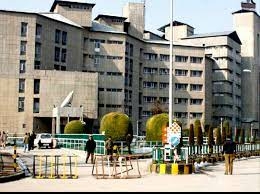 Srinagar: Imagine if a hospital does not have syringe to administer life-saving injection.

This is not a fairytale but a reality in Kashmir.

Sher-i-Kashmir Institute of Medical Sciences (SKIMS), Soura, the largest tertiary care hospital in the valley, is presently facing an accute shortage of syringes.

Established in 1982, Kashmir health care is largely dependent on SKIMS where thousands of people visit daily for treatment. However, the supply of syringes at the premier health institute is disrupted at present.

Earlier in September, the hospital was already dealing with the shortage of life-saving drugs including Pantop, PCM, Tramadol and Potassium Chlorides, and Diazepam.

A staffer at SKIMS said though the crisis of medicines has been resolved, the syringes still remain in short supply.

“Syringe supply is still deficient. Normally, we used to administer around 200-250 syringes in our ward daily. However, now only 100 syringes are made available per day. Rest, the patients have to procure themselves from the market,” he said, wishing not to be named.

The injections in short supply include Sodium Bicarbonate, Potassium chloride, and Rantidine. “It is definitely causing huge inconvenience to the attendants and can put a patient’s life at risk,” he said.

Medical Superintendent Dr Farooq Jan said the hospital administration has been proactive in resolving the crisis of medicines to a great extent.

“There is no shortage of medicines as such. However, we have already placed an order for syringes. There is a problem countrywide with regard to supply of syringes as the issue lies at the manufacturing level. For now, we are dealing with it but we might land in a crisis if the supplies don’t come in some days,” he said.