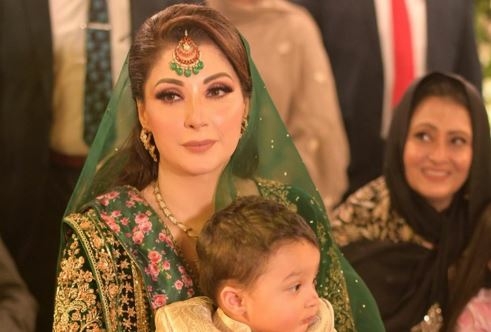 Maryam wore specially designed clothes for each and every wedding ceremony. She wore a pink sari, a blue lehenga with henna on the qawwali night, and a green lehenga for the procession. The blue lehenga she wore for her son’s mehendi was designed by India-based designer Abhinav Mishra.

The silk lehenga was covered with mirror and goat work, wearing which the beauty of Maryam Nawaz was engrossed. The price of this lehenga is more than four lakh Pakistani rupees on Abhinav Mishra’s website.

At the same time, her son Junaid Safdar wore a sherwani designed by Pakistani designer Hasan Shahryar Yasin for the most special moment of her life. The special thing about this sherwani was that it was prepared from the natural things of Pakistan.

The marriage of Junaid Safdar, daughter of former Prime Minister Nawaz Sharif and son of PLM-N vice-president Maryam Nawaz, to Ayesha Saif Khan has been a topic of discussion in Pakistan. A grand procession was organized for Ayesha and Junaid. This marriage ceremony lasted for a week in which well-known people of Pakistan participated.

The thing that is discussed the most about this marriage is the clothes of Maryam Nawaz. The clothes that Maryam Nawaz wore at the son’s wedding and how beautiful she looked, are being discussed everywhere in Pakistan.

After the video went viral on social media, Maryam Nawaz appealed to the people to respect their privacy. In a tweet, she said that her son’s wedding is a private ceremony and like all mothers, she deserves to celebrate the occasion without political comments.