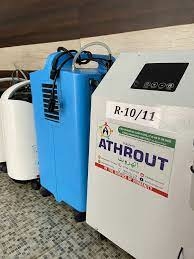 Srinagar: Local charities and Non-Government Organizations (NGOs) have mobilized their men and machinery to combat the third COVID wave in Kashmir.

For the last two weeks, the COVID-19 cases have surged in Jammu and Kashmir prompting the administration to impose weekend lockdown and night curfews.

From merely 150 cases, the daily caseload has gone up to more than 4600 in the union territory.

Sensing a crisis, NGOs and charities have geared up to deal with any medical emergency.

Local charities have stocked oxygen concentrators to mini-ventilators and cylinders. They have deputed volunteers in all the districts for quick response to medical emergencies.

SRO- Kashmir, which also played a vital role in the last two waves, said it has stocked oxygen concentrators, cylinders, and non-invasive ventilators.

“Out of 250, we have 100 oxygen concentrators available with us. We have increased the number of oxygen cylinders to 800 from 500 during the second wave. We have a sufficient stock of equipment to deal with the medical emergency,” said Mohammad Afaq Sayeed, who heads SRO Batamaloo.

Sayeed said compared to the previous month, the demand for oxygen concentrators and cylinders has increased by 15 percent.

“Though the cases have increased manifold, the oxygen dependency seems to be less. We are fully prepared,” he said.

Jammu and Kashmir administration has upgraded its health infrastructure to tackle the COVID wave.

From ventilators to oxygen-supported beds and isolation beds, the healthcare institutions across the union territory have been kept ready to deal with the situation.

The isolation bed capacity in hospitals and healthcare institutes has increased by over 100 percent in the last six months. In May 2021, there were 8820 isolation beds for COVID-19 patients. It has been increased to 19783 beds.

Similarly, ventilators, which are essentially required for severe COVID patients too, have been increased. In May 2021,  Jammu and Kashmir had 757 ventilators. The number has now increased to 1320.

The administration has also increased the number of oxygen-supported beds from 3987 in May to 5468 in December.