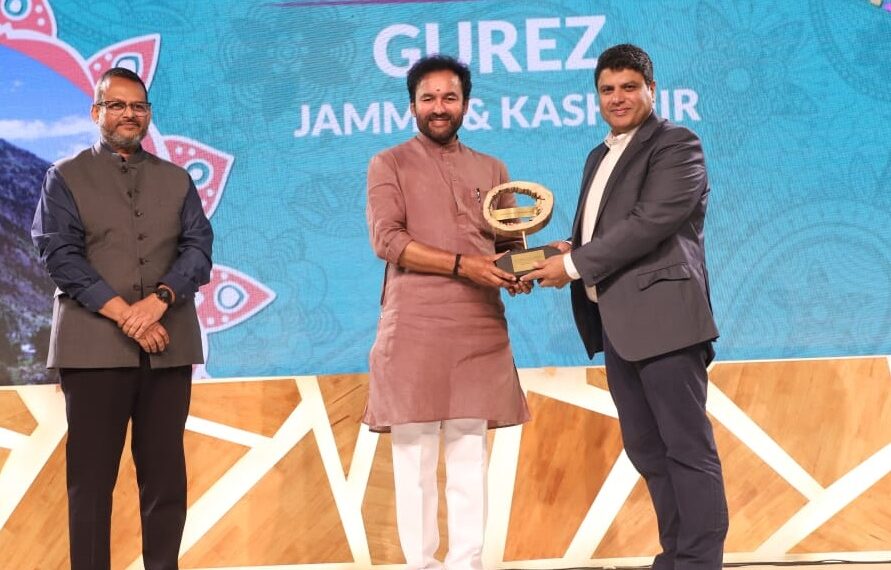 NEW DELHI, AUGUST 24: J&K Tourism has bagged an award for promotion of off destinations at the national level at the Outlook Traveller Awards-2022.

The award was presented by Union Minister for Tourism & Culture, G Kisan Reddy to Secretary, Tourism, Sarmad Hafeez at a glittering function here this evening.

The award was given to the Tourism Department for promoting Gurez in the category of offbeat tourism destinations. J&K Tourism also bagged the silver award for adventure tourism at Gulmarg.

Speaking on the occasion, the Union Tourism Minister said it was satisfying to note that tourism in J&K has seen a turnaround in the last two years and the tourist arrivals this year have crossed a record number. He said under the new film policy, shooting of films in J&K has been revived and is being incentivized.

Complimenting the organizers for holding the award ceremony, Mr. Reddy said this would certainly encourage the best practices in the tourism sector. He also complimented the States and UTs which bagged the awards saying it would go a long way in encouraging and promoting tourism in the country.

The Union Minister said an environment of tourist activities is prevailing in the country and the Union Government is taking steps to further strengthen the sector. He said the Government is contemplating to bring National Tourism Policy in the next budget session.

Earlier, participating in various panel discussions, Sarmad Hafeez dwelt in detail about the measures taken by the J&K administration in broadening the canvas of tourist destinations and attractions across J&K. He said due to the sustained and coordinated efforts of the Tourism Department and stakeholders this year J&K saw record tourist arrivals in many decades.

The Outlook Traveller Awards are the benchmark of quality in the travel and tourism industry for the last two decades and felicitate the best of the best each year. The awards take a 360⁰ view of the tourism sector and the way it has been growing.