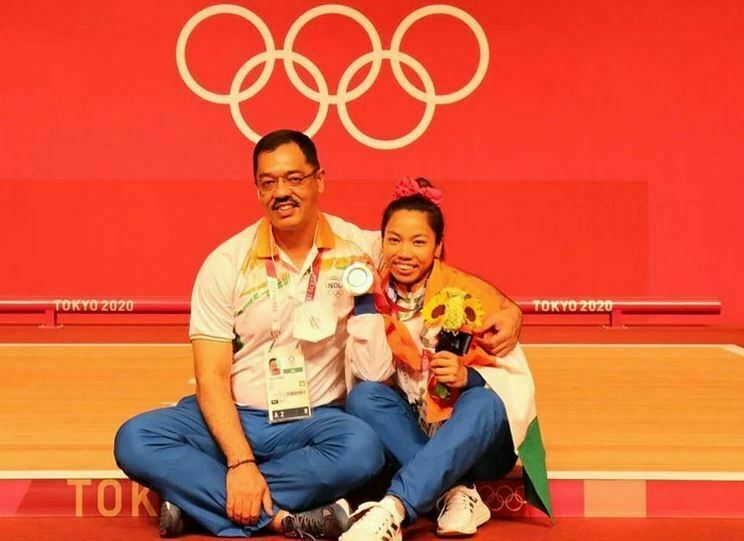 SRINAGAR: We all know that success comes at a cost. No person can claim any achievement without putting efforts. It is the law of nature to reward labour. In sports the significance increases manifold. It is no easy ballgame to reach to the top in any sports without practice and training. So, coaches are the masters of success of every athlete.

Coaches put their best to realise  dreams of their trainees. They are the ones who tread the path ahead of the player to clear it for them. They make it easy for players where they themselves have faced hardships. In a way the success of each athlete comes through their coaches.

Such is the story of Vijay Sharma, son of the soil, who is the National Coach of Indian Weightlifting Federation (IWLF) and recently made the entire nation proud when one of his trainees, Mirabai Chanu won Silver Medal for India in Tokyo 2020 Olympics.

Having roots in Jammu and Kashmir, Vijay Sharma originally hails from Sohal Tanda village of Akhnoor in Jammu district and is the son of an Army man who had joined the force at the age of 16. After his father retired from Army in 1968-69, they moved to Modinagar, Delhi and there his father started working for a private transport company ‘Krishna Transport’ as driver.

Dronacharya Awardee, Vijay Sharma, born in 1970, was interested in sports from his schooling days and was competing in football, athletics and other sports on regular basis. “I was average in studies during my school days and was very much attracted to sports. Seeing this, my father supported me and motivated me to take up sports with studies also”, Vijay Sharma said.

During the college days, his interest in sports amplified as he came to know that by excelling in sports, one gets good employment opportunities in government sector. “In the year 1989 while at college, I took to weighlifting  with an aim to get job opportunity and in 1992 I won a gold medal in All India Inter-university and bronze medal in senior National Championships in weightlifting”, Vijay Sharma says with satisfaction.

With an injury to his wrist in 2000, Vijay though stopped participating in this sport but his love for it didn’t diminish and he became a coach of weightlifting. “After my wrist injury, I didn’t leave the sport and became a coach. Later, I opened a gym in my locality and started  training locals players and also continued to train my Railways team”, Sharma said.

Vijay’s career took a turn when he was called up by the IWLF for a National Camp in 2011 and since than there has been no stopping for the Dronacharya Awardee Sharma. “After a call  from IWLF, my career took a turn and since 2012 I am a regular National Coach of IWLF which was a proud moment for me, my family and entire Jammu and Kashmir”, an elated Sharma said.

The National Coach Sharma has been instrumental  in bringing laurels for country during Weightlifting competitions in mega sporting events  like Olympics, Commonwealth Games, among other World Championships. “During 2014 Commonwealth games our team won maximum medals, in 2016 Rio Olympics our player finished 10th, in 2018 Commonwealth our medal tally increased and in 2020 Tokyo Olympics, Mirabai Chanu made our country proud by winning a silver medal”, Vijay Sharma said.

Sharma has been a National Coach at IWLF since 2012 and trained players like Poonam Yadav, Satish Shivlingam, Vikas Thakur and others.

Vijay has been away from J&K since childhood but his love for the hometown has never diminished. “Though I live outside J&K but my love for my place has not diminished and I visit my village every year with my family so that I remain attached with my roots”, an emotional Sharma remarks.

Highlighting that the Jammu and Kashmir has vast potential in sports, Sharma says that our youth just need a bit of guidance with good training. “J&K has been developing sports infrastructure from last couple of years but only infrastructure cannot produce good athletes”, Sharma said. He adds, “We need to have a good number of coaches and trainers in J&K so that we can produce world class athletes”.

The National Coach says that he is always available for his services to J&K. “I will always help J&K government in drafting any roadmap for developing sports infrastructure and training pattern so that athletes of international standard  are produced here”, Sharma remarks.

In his message to youth and aspiring athletes of J&K, Vijay Sharma says that they should follow their dreams and aspirations and should take sports as a career.