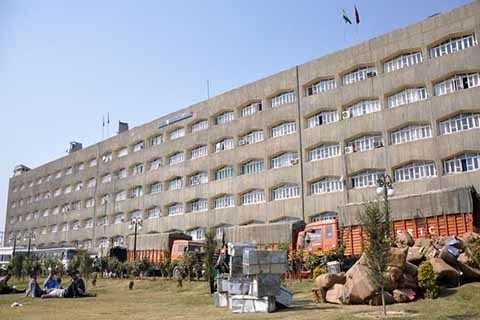 Srinagar: An orderly posted in Civil Secretariat, the highest seat of the government here, has tested positive for the novel coronavirus.

A senior officer and some staffers have already gone in self-quarantine as soon as news about the orderly testing positive was communicated by the health authorities.

Sources said that the orderly, a resident of Mansbal, had carried dusting in the office of the Director Expenditure last Sunday, a day before Darbar Move offices opened here.

Tariq Khan, Director Expenditure, told news agency GNS that the orderly’s brother is battling cancer and is admitted at Super Specialty Hospital Shreenbagh and “he (the orderly) would visit him regularly.”

“He was told to not come to the office already. As a precautionary measure, I have gone to self-quarantine,” Khan said.

He said that on inquiring into reasons for him visiting the secretariat despite instructions it has come to fore that he was following the case of his brother, a cancer patient, for monetary assistance.

This is the first case when any employee at the secretariat has tested positive.

Following it, Srinagar Municipal Corporation carried out sanitization at third and fourth storeys of the building which also houses among others the offices of lieutenant governor, his advisors besides top bureaucrats.

DC Srinagar rebutted the media reports that the entire secretariat had been sealed.

A senior officer at the secretariat said that immediate measures were required to be taken for the safety of others.

“The CRPF personnel posted at the entrance would frisk every individual. The employee would have roamed around while visiting the secretariat,” he said, adding, “The government needs to move swiftly to see who needed to be isolated in wake of the incident.” (GNS inputs)