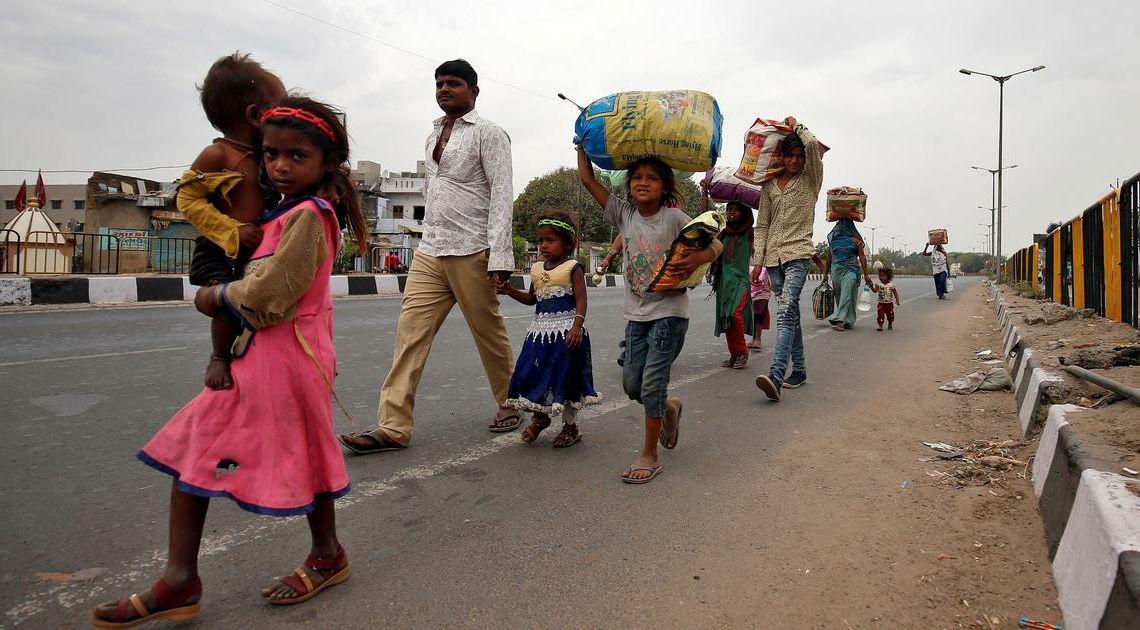 Dozens of migrant workers have fallen sick or died on their way home, either from fatigue or in accidents, while trying to reach their rural homes. (Photo: Internet)

It is possible you recalled the lyrics of Exodus, the song that reggae singer Bob Marley belted with such élan, as you watched lakhs of migrant workers trudge from cities to villages, clutching their belongings tied in a bundle, their children beside them. This is not quite the exodus that Marley alludes to in his song, yet its lyrics are pertinent to India: “Uh! Open your eyes and look within/Are you satisfied (with the life you’re living)? Uh!/We know where we’re going, uh! We know where we’re from/ We’re leaving Babylon, we’re going to our fatherland.”

Bob Marley’s imagining of leaving a corrupted Babylon for the fatherland in his song Exodus, is today the reality of lakhs of migrant workers rejecting the Indian state and returning home

Babylon in the Rastafarian belief, to which Marley subscribed, symbolises the land from where the righteousness has disappeared. Babylon also connotes the capitalistic-imperialistic order of the West, which still exploits the descendants of Black slaves for cheap labour. The only succour for Blacks, in Marley’s imagining, is to leave the sinful Babylon and return to their fatherland, or Africa, from where they were shipped out to the West centuries ago.

The Indian city has always been a Babylon for migrant labourers, but they perhaps never looked within to ask: Were they satisfied with the life they were living? They, unlike Blacks, flocked to the city, seduced by its lights, in contrast to the darkness their villages swirled in. Their eyes opened as the national lockdown was imposed on March 24.

Thus was the city revealed to them as heartless as Marley’s Babylon — the otherwise cooing employers refused to pay them wages for days they did not work; their congested quarters, in slums, made it impossible for them to practise distancing and protect themselves against the Coronavirus. Stalked by starvation and illness, abandoned by the state, they defied the lockdown, braved police lathis and trekked hundreds of miles to reach home.

Marley’s fatherland is not just the trope for the land of righteousness, but also for home, which, to quote poet Robert Frost, is the “place where, when you have to go there, they have to take you in.” Home is not the Republic of India. Home is only the migrant’s village, beyond which unwinds the road to Babylon.
Indeed, the ongoing exodus from cities is resistance camouflaged as a rejection of the Indian state.

Exodus as a method of resistance has been a feature of India’s history. This is pointed out by Professor Irfan Habib, in The Peasant in Indian History, a paper written for Social Scientist, citing as evidence a passage from the writing of Varahamihira, the 6th-century polymath, which describes desolate villages abandoned by peasants owing to the tax-collector’s oppression. Likewise, Mridula Mukherjee in her paper, Peasant Resistance and Peasant Consciousness in Colonial India, writes, “… When tax demands became exorbitant or unbearable, peasants…fled from their old lands to the land of other zamindars or rulers who promised them better terms.”

In fleeing the city in the 21th century, the migrants have conformed to American political scientist James C. Scott’s view that “most resistance in history did not speak its name.” These remained below the radar because the participants did not conceive them to usher in a revolutionary change, a thesis Scott propounds in his seminal work, Weapons of the Weak: Everyday Forms of Peasant Resistance, which he wrote after studying a Malaysian village for two years.

Acutely aware that resistance against the state and elite norms is often crushed, peasants choose everyday forms of resistance such as faking compliance with the established order, yet engaging in slander, pilfering, go-slow at work, etc. Peasants do not articulate their grievances through protests. Their tactic, instead, is to work the system, as Eric Hobsbawm said, to their “minimum disadvantage.”

This style of resistance is not just confined to villages, a point Scott makes by comparing the impact of desertion from the army to that of mutiny against officers. Mutiny invites punishment and may not even lead to the replacement of officers. Desertion implies, Scott writes, a “massive withdrawal of compliance [that] is in a sense more radical in its implications for the army as an institution than the replacement of officers.”

The exodus of migrants does not appear as resistance because they, like deserters from the army, have eschewed confronting the state. They simply packed up and left, their scale of quiet defiance compelling the state to arrange transportation and free ration for them, however belatedly and niggardly.

The state, however, seems to have mistaken the exodus as a choice made by migrants out of their obsequious nature. Otherwise, several States would not have thought of quashing the worker’s rights through ordinances. It is apposite here to quote from Marley’s another celebrated song: “You can fool some people sometimes/But you can’t fool all the people all the time/So now we see the light (What you gonna do?)/ We gonna stand up for our rights! (yeah, yeah, yeah)…/Get up, stand up!/ Don’t give up the fight.” Sadly, the Opposition lacks the moral authority to lead them in their fight for their rights.

The writer is a senior journalist and a regular columnist for The Kashmir Monitor. Views expressed are personal. Feedback at [email protected]