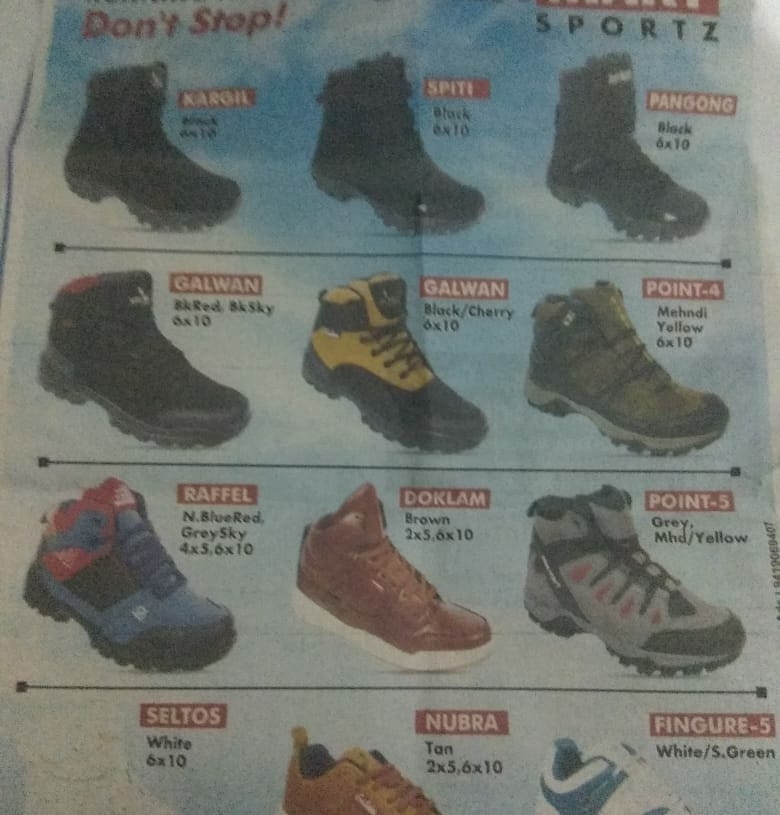 Srinagar: For the record, Galwan is a monster winter shoe and Raffel is multicolour sports footwear.

Don’t be shocked, this is a hard corporate reality. Cashing in on popular sentiments, a footwear company has come up with a collection of shoes named after warzones and fighter jets that hit headlines in 2020.

John Mart Sportz, a famous footwear company has selected 12 names which remained in news for the last few months. The company has unveiled a collection of shoes for winter wear to attract the attention of Kashmiri customers this fall.

Kargil, Pangong, Galwan, Point-4, Raffel, Doklam, Pont-5, Spiti, Seltos, Nubra, and Fingure 5 are the names of shoes that have been unveiled this fall. The shoe company has also launched a publicity blitzkrieg with a quarter-page advertisement for their collection.

“Names which are on the lips of people are being used everywhere. For example, cars use catchy names like victor, hector, etc. Similarly, there was tension with China and these names were in circulation. So we used these names,” said Naresh Sharma, sales in-charge, John Mart Sportz.

Sharma said these names are not patented and in case there is any, they will remove it. “There is always a team that discusses the pros and cons before selecting a name. The names which are popular and in the public domain are being selected,” said Sharma.

Twenty soldiers including a colonel were killed in a violent face-off between Indian  and Chinese troops at Galwan Valley along the Line of Actual Control (LAC) in Ladakh on June 15.

Similarly, the Chinese army had entered an eight-kilometer inside Pangong Tso up to Finger Four during the faceoff on the LAC. Indian and Chinese troops were locked in a tense standoff at Doklam in 2017.

In 1999, the Indian army launched Operation Vijay to drove-out Pakistani army soldiers and recaptured the mountain peaks and heights in Kargil, Drass Batalik, and other sectors on the Line of Control in Ladakh division. Around 527 Indian soldiers were killed and 1360 others were injured in the war that was fought on one of the difficult and inhospitable terrains.

Rafale is a fourth-generation fighter jet designed and built by French Dassault Aviation. India has ordered 36 jets to beef up its air power. The first batch of five jets were formally inducted into Golden Arrows Squadron of the IAF  on September 10 at the Ambala Air Force base.