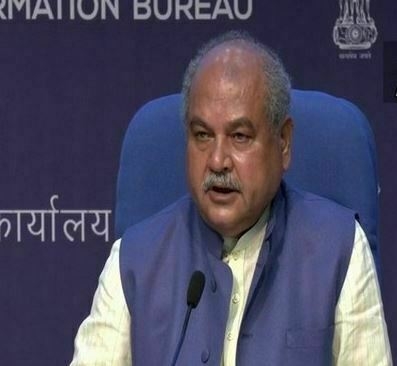 New Delhi: As part of the Centre’s outreach programme for Jammu and Kashmir, Union Agriculture Minister Narendra Singh Tomar and his two deputies Kailash Choudhary and Shobha Karandlaje would hold interactions with farmers, agriculture scientists and other stakeholders in the Union Territory to explain various welfare measures and policies.

The three Central Ministers will also visit agriculture universities in Jammu and Kashmir. The ministers would be in the Union territory till September 11 and will interact with various sections of people.

According to reports, the three ministers will hold a detailed session with mayors and chairmen of various municipal corporation committees during the visit.

The visit of the Union Agriculture Ministres comes as part of the Centre’s confidence-building measures in the aftermath of abrogation of articles 370 and 35 A.

Not just building trust, the ministers are expected to engage with bureaucracy and guide them regarding various welfare measures of the Narendra Modi government to ensure delivery to the people of the UT.

Reports stated that the Centre has decided to restart its outreach programme in Jammu and Kashmir and Ladakh.

Interestingly, while Central ministers are scheduled to visit the UT, Congress leader Rahul Gandhi too is expected to be in Jammu today and pay obeisance at Mata Vaishno Devi temple before addressing party workers.

“The region remained neglected for so many years. It is time to normalise development in both the UTs. Apart from undertaking their respective ministries work and meeting the stakeholders, ministers will formalise issues in writing that should be reported to the Centre,” stated a source.
In January this year, approximately 36 ministers had visited the two newly-formed UTs of Jammu and Kashmir and Ladakh to understand local issues and usher in development.

“This exercise was discontinued for months due to Covid pandemic. It has been reinitiated as the development will bring more stability in the area,” reports quoting sources added.

Ministers are likely to culminate their three day trip with a darshan of Vaishno Devi temple thereby giving impetus to PM Modi’s call to visit places in our own country. (With inputs from agencies)