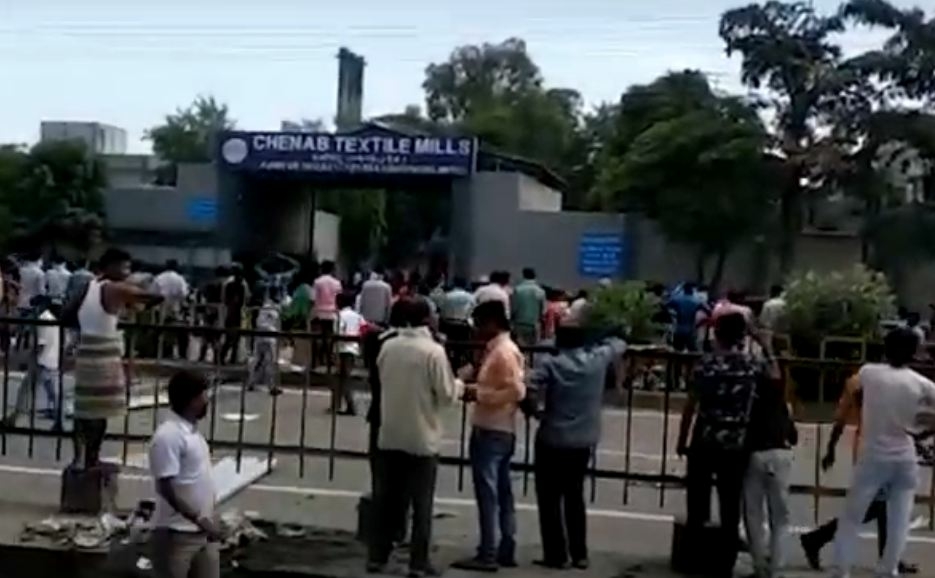 Srinagar:  Amid COVID-19 lockdown, hundreds of migrant labourers working in a textile mill in Kathua district of Jammu and Kashmir Friday staged protest demonstration against non-payment of wages even as many of them resorted to stone pelting and vandalism.

Scores of these labourers from Uttar Pradesh, Bihar and other states of India working in Chenab Textile Mill (CTM) Kathua assembled on the Jammu-Pathankot highway and shouted slogans against their employer and the government while pelting stones at the premises of the mill.

Media reports showed workers running amok on the highway while demanding release of their pending wages.

The workers were seen damaging the vehicles as well as public property.

They alleged that they were being paid Rs 350 per day but the management of the factory have credited the wages at the rate of Rs 175 per day to their accounts which was grave “injustice” in the prevailing circumstances, The Tribune reported.

SSP Kathua Shailendra Kumar Mishra reached on the spot and tried to pacify the workers.

The incident has come at a time when hundreds of thousands of workers are in a desperate situation while being stranded in several parts of India.

Thousands of them have set on foot to their birthplaces covering hundreds of kilometres.

In one such incident, 16 migrant workers who had left Maharashtra for them homes were run over by a train after they slept on the tracks after covering over 35 kilometres on foot.