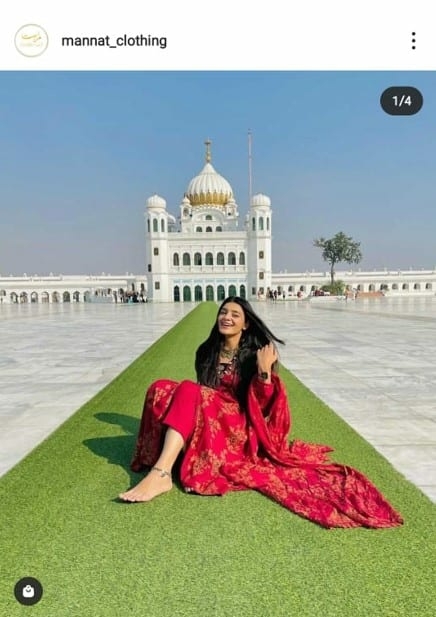 A model has apologized after her `bareheaded’ pictures at Gurdwara Darbar Sahib in Kartarpur triggered outrage.

On Monday, Mannat Clothing posted pictures of Sauleha on their Instagram page. The photoshoot was held at the Gurdwara Darbar Sahib. Sauleha was seen walking inside the premises without her head covered.

Shiromani Akali Dal spokesperson Manjinder Singh Sirsa shared the photos pointing that the model was bareheaded. Covering one’s head in a Gurdwara is mandatory and considered as a way of showing respect for the revered place.

Sensing trouble, Sauleha apologized to the Sikh community saying she did not intend to hurt anyone and the pictures were supposed to be a memory of her visit to Kartarpur Sahib.

“Recently I posted a picture on Instagram that was not even a part of a shoot or anything. I just went to Kartarpur to learn about the history and know about the Sikh community. It wasn’t done to hurt anyone’s sentiments or anything for that matter. However, if I have hurt anyone or they think that I don’t respect their culture. I am sorry,” she wrote on Instagram.

Both the brand and model also clarified that the pictures were not part of a photoshoot.

Pakistan police have initiated a probe into the incident. Police said they are investigating all aspects relating to the photoshoot and will take strict legal action against those responsible.

Pakistan’s Information Minister Fawad Chaudhry also said that the designer and model must apologize to the Sikh community.

“Kartarpur Sahib is a religious symbol and not a film set,” he tweeted.