No pork, no beef: New diet plan for Indian cricketers include only ‘Halal certified’ meat 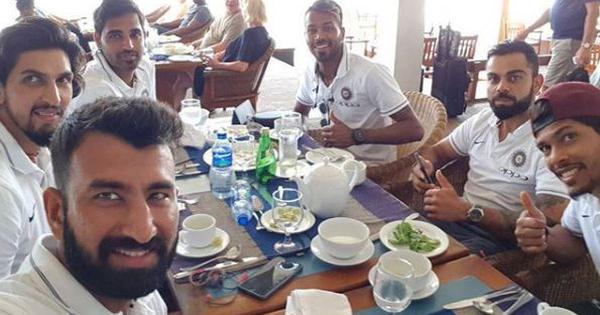 A new dietary plan for Indian cricketers has banned pork and beef, and recommended only halal-certified meat for consumption.

According to Sports Tak, the new diet plan was drawn up after the humiliating performance of the Indian cricket team during the recently concluded T-20 International World Cup, where India could not qualify for the semis for the first time since its inception in 2007.

Following their embarrassing run at the world cup and after Rahul Dravid became the head coach, with Rohit Sharma captaining the side, players of the Indian Cricket Team have been asked to follow a strict diet plan, which entails the exclusion of pork and beef in any form, in a bid to keep them fit and healthy. They have been reportedly instructed that those who wish to have meat can consume only halal-certified meat, with a complete ban on any other form of meat consumption.

The dietary regime is enforced with the aim of keeping players fit and healthy for important series and upcoming International Cricket Council (ICC) tournaments. The management wants to ensure that the players don’t gain any unnecessary pounds or develop a healthy waistline before any important series or event, which inevitably affects and reflects on their on-ground performance.

The report said some players are finding it difficult to maintain the intensity as they are playing non-stop cricket across the formats and are living in unyielding bio-bubble protocols. With other mandates, the players now need to be extra cautious with their eating habits as well, especially, those players who like consuming meat products on a daily basis, as the new dietary plan would impose many restrictions on what they consume.

Halal, a religiously discriminatory practice that promotes differentiation between Muslims and non-Muslims

The new dietary plan followed by the Indian team is profoundly disturbing, given that it lays emphasis on consuming only halal-certified meat products. While the proponents of halal try to understate its imposition as non-vegetarian and vegetarian food, they, however, fail to appreciate the details of the process of Halal that makes it an explicit religiously discriminatory practice much like untouchability.

Halal can only be performed by a Muslim man. Thus, non-Muslims are automatically denied employment at a Halal firm. There are certain other conditions that must be fulfilled that make it quite clear that it is intrinsically an Islamic practice. Guidelines are available at the official website of a certification authority of Halal in India which makes it clear that non-Muslim employees cannot be employed in any part of the slaughtering process.

Throughout the document that lists the guidelines to Islamic slaughtering, care is taken to mention the religion of the employees involved. It makes it abundantly clear that only Muslim employees are allowed to participate in the entire process at every stage. Even the labeling of meat can be done by Muslims only.

The Department of Halal Certification of the European Union makes it even clearer that employment opportunities at a Halal firm will be exclusively available to Muslims. “Slaughtering must be done by a sane adult Muslim. Animals slaughtered by a Non-Muslim will not be Halal,” the department said.