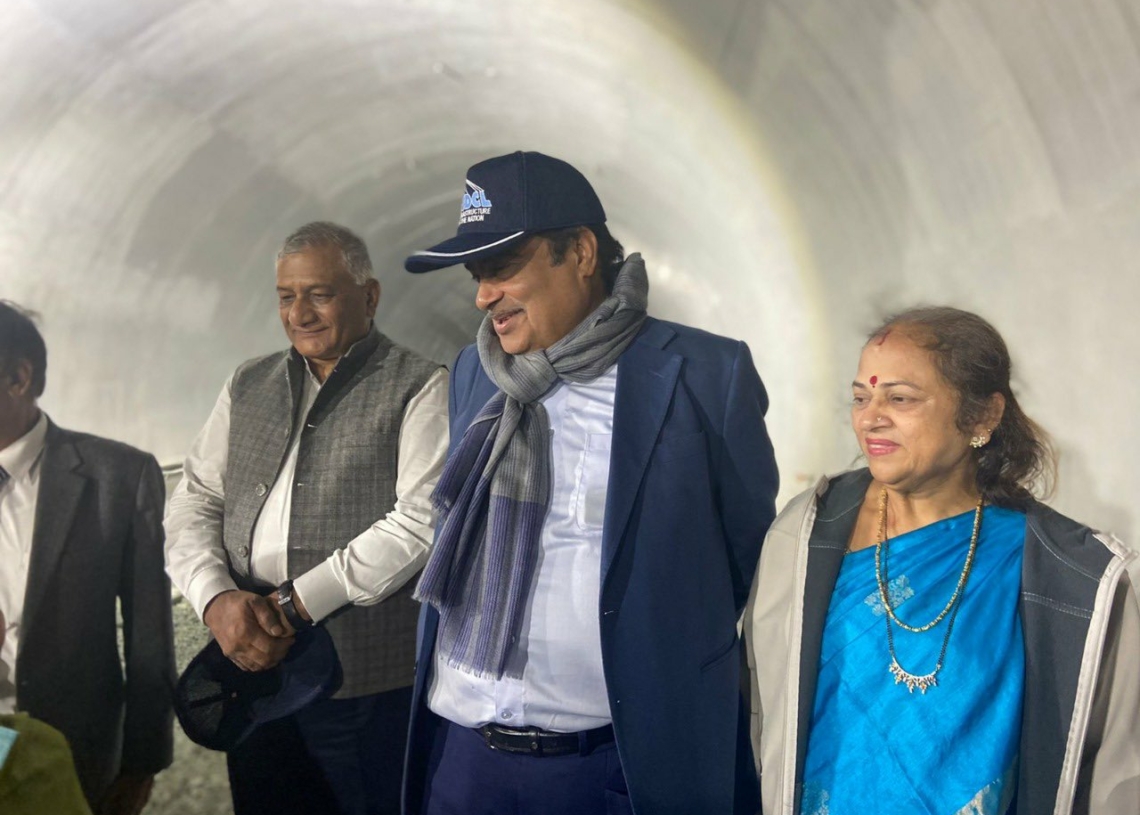 Srinagar: Union Minister for Road Transport and Highways Nitin Gadkari Tuesday expressed satisfaction over the construction work of the Zojila tunnel and said that he has directed the authorities to complete the approaching tunnels before the 2024 parliamentary election.

“I am satisfied with the speed of the construction and have told the authorities to complete the construction of the approaching tunnels before May 2024, so that we can show the opposition that we have achieved,” Gadkari said, while addressing a press conference after inspecting work progress on Zojila and Z-Morh tunnel. Gadkari said that projects worth Rs 1 lakh crore are currently being implemented in Jammu and Kashmir.

“Among all the projects, six of them are the most important ones for the socio-economic development of Jammu and Kashmir,” he said. Gadkari said that since 2014, after the Bharatiya Janata Party (BJP) took over the government, the national highway has been stretched from 1695 km to 2664 km. “There has been an increase of 969 km in the national highway,” he said.

Gadkari visited Zojila and Z-Morh tunnels to review and inspect the ongoing work. The minister is on a two day visit to Jammu & Kashmir to review the progress on Tunnel 1 and Tunnel 2 at Nilgrar site. These twin tunnels are part of an 18 km long approach road to Zojila west portal. He also visited the Zojila through the east and west ends.

Addressing the media, settlement engineer Burhan Ahmad said that NHIDCL is geared up to continue the work on Zojila tunnel in winter months and the project will provide all weather connectivity to the Union Territory of Ladakh.

The Zojila tunnel is of a significant importance to the development and tourism for both UTs of J&K and Ladakh as it will provide round the year connectivity to Ladakh region.

Prashant Kumar (DGM) while talking with reporters said that the tunnel has a historical significance and for the last 20 years the government is working on the project.

“Without wasting a day, we are doing work round the clock to complete the project before scheduled date to connect the people of J&K Union Territory with Drass, ladakh UT round the year,” Kumar said

The entire work is divided into two divisions in the 33 km span. The project site of Zojila tunnel is located at existing highway (NH-01) starting from Sonamarg (UT of J&K) and ending at Minimarg (UT of Ladakh) at an elevation ranging from 2700m to 3300m.

While Z-Morh tunnel would connect Srinagar to Sonamarg during winter months, another technological feat would be achieved with the Rs 4,600-crore Zojila Tunnel that would further connect to Leh in the Ladakh region.

Strategically built at 11,578 feet high altitude, Zojila tunnel uses New Austrian Tunnel Method (NATM) technology that allows for ventilation and evacuation. According to Brig Gurjeet Singh Kamo, executive director, National Highways and Infrastructure Development Corporation (NHIDCL), the Jammu and Kashmir region will have 10 national highways and one expressway between Delhi and Katra. The government-owned NHIDCL is the nodal agency for Z-Morh and Zojila tunnel projects. Works worth Rs 6,500 crore have been completed while those worth Rs 22,500 crore are ongoing.

Hyderabad-based Megha Engineering & Infrastructure Ltd has undertaken the 14.5-km Zojila project and APCO is building the 6.5-km Z-Morh tunnel under the EPC mode.

The 11,500 feet high Zojila tunnel is being vertically constructed because of the altitude. The Zojila project has a 5-km approach road, and 6.5-km tunnel.