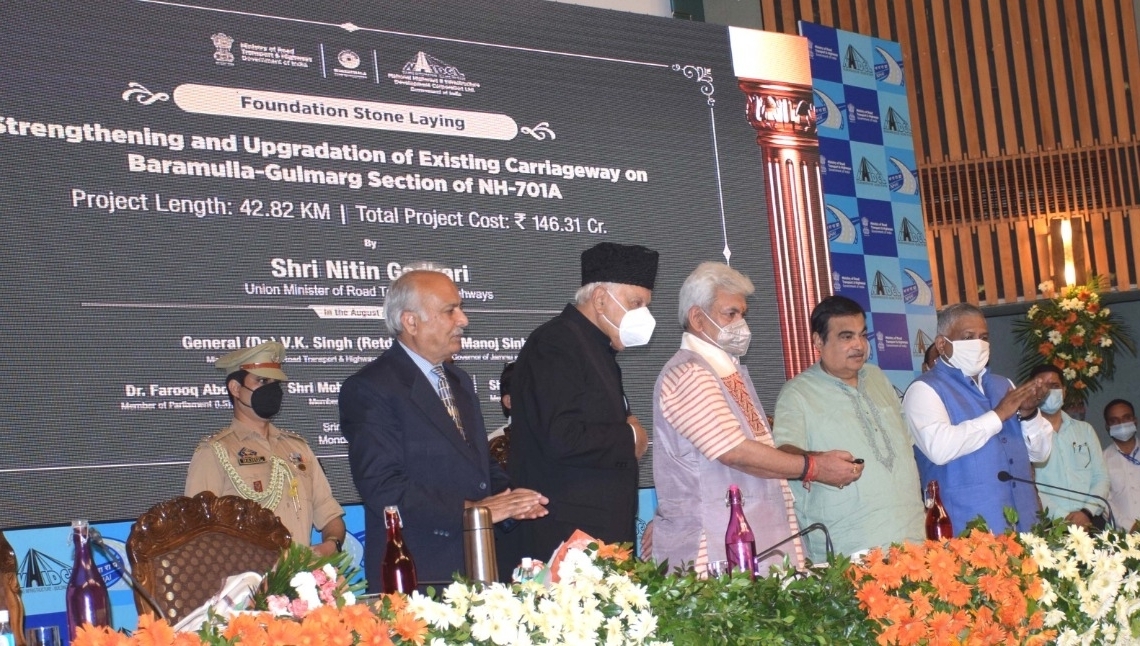 “Kashmir will be connected to Kanyakumari by train in December 2022”

Speaking on the occasion, the LG said the projects will “catalyse J&K’s socio-economic development”.

The LG also said that “Kashmir will be connected to Kanyakumari by train in December 2022”.

“Today roads are being built at a much faster pace than ever before. This year a target of 8000 km of macadamisation has been set. J&K UT fares third in the whole country in terms of road construction,” he said.

Thanking PM Narendra Modi Ji, the LG said “he has brought qualitative change in people’s lives since 2014. From National Highways to rural roads, the infrastructure has become stronger than ever.”

“Special thanks to Hon’ble Union Minister Shri Nitin Jairam Gadkari Ji who has created a record for the fastest road construction work in the country,” the LG added.

“Till 2014, he said, there were only 7 NH projects in erstwhile J&K including Ladakh.

In the last one year, he said, 11 tunnel projects have been approved.

Baramula-Gulmarg: NH-701A in Jammu & Kashmir. The project involves upgradation of the existing carriage way. The length is 43 kilometres in total and the project has been awarded at a cost of Rs 146 .31 crore. This Baramula-Gulmarg stretch will improve the riding quality of the National Highway for tourists to visit Gulmarg.

Vailoo to Donipawa (P-VI): National Highway 244 in the district of Anantnag in Jammu & Kashmir. This involves construction as well as upgradation (2L+PS) of the road. The total length of the stretch is 28 kilometres, and the project has been awarded at a cost of Rs 158 crores. The NH stretch will provide connectivity to Kokernag and Vailoo.

Donipawa to Ashajipra (P-VII): National Highway 244, connecting with NH-44 in the district of Anantnag. Development of a new bypass (2L+PS). The total length of the stretch is 8.5 kilometres, awarded at a cost of Rs 57 crores. This NH section will bypass Anantnag town.